The Samsung Galaxy S III is currently the most popular Android smartphone in the market, and although it has already shifted in the tens of millions, it is a little too on the large side for many consumers to invest. That could all change, however, with the introduction of a purported Galaxy S III "Mini," which will pack in a similarly-impressive array of specs into a more compact unit. Sounds good? Indeed it does.

The South Korean LCD specialist has a special event penned for October 11th in Germany, and although it was previously thought the Galaxy Music would be unveiled officially to the on-looking tech world, it now looks as though something a little more significant could be on the horizon. AllAboutSamsung managed to get its hands on one of the invitation, and it looks as though the ‘S’ – stylized in the same manner as that of the Galaxy S series – is imprinted on the invitation.

That alone wouldn’t be enough to speculate a smaller Galaxy S III, but the included line of “small is now a big hit!” suggests the company’s flagship smartphone could indeed be in the pipeline. Incidentally, that same motif is something Apple will be applying this month by bringing out its own "mini" device in the smaller iPad, and for those who’ve been put off purchasing an S III by the sheer size of the device, a more compact form factor may see you – and many others like you – reconsider opting for the smartphone. 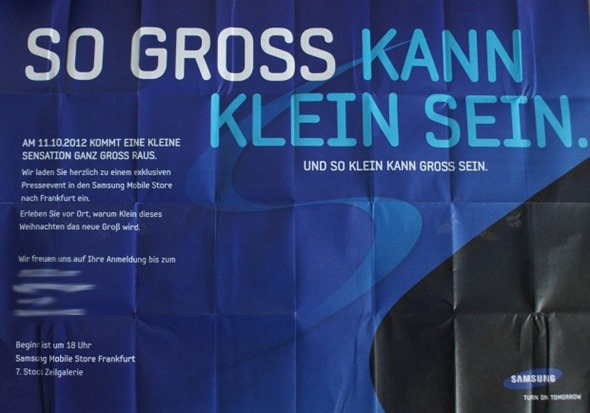 Although I  believe the device announced may be smaller in physical dimensions, I have reservations as to whether it will indeed be a smaller Galaxy S III. The normal version, which packs a 4.8-inch display, is certainly large compared with Apple’s iPhone 5, but in the context of the market, measures in fairly averagely, considering that having a bigger screen is the norm these days.

What do you, our readers, make of this? Are we paying too much attention to detail, or do you think Samsung will indeed be bringing a smaller S III? Please do share your thoughts via the usual mediums below.