Apple and Samsung, fierce competitors in a number of categories and markets, are primarily the vendors of the two biggest smartphones, and after the pair fought a brutal patent war in San Jose, the outcome saw sales of the Korean company’s flagship Galaxy S III increase significantly. Moreover, the release of Apple’s iPhone 5 – which sold in record numbers with 5 million units pushed on the first weekend alone – also saw consumers flock for the Galaxy S III, presumably having assessed the Cupertino’s offering and deciding to opt for the quad-core handset.

These figures have emerged courtesy of a report from research outfit Localytics, and although much of the media’s attention surrounds Apple and its sixth-generation iPhone 5, the Galaxy S III has been quietly accumulating good growth figures, with both the court judgment – and the release of the slimmer, lighter, and faster iPhone – prompting noticeable growth spikes.

Indeed, after the trial verdict with Apple, in which Samsung was ordered to pay damages in excess of a billion dollars, new device growth of the Galaxy S III increased 16 percent, which is a significant rise compared with 8 percent the week before and an around 9 percent per week since the beginning of August. The launch of the the iPhone 5 saw a similar injection in new device growth for the S III, which was bumped 15 percent compared with 0 percent on the prior week. 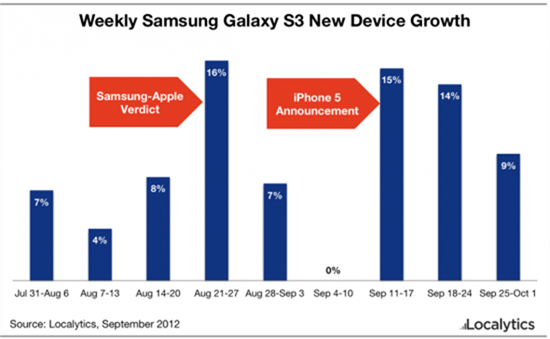 The court battle in San Jose, overseen by the no-nonsense Judge Lucy Koh, was a long and fiercely-fought one indeed, and although Samsung stood its corner resolutely, cracks began to emerge when Apple unearthed internal documents of its rival, detailing exactly how the South Korean giant went about scrutinizing the iPhone and utilizing design traits for its own ends.

Still, they say any publicity is good publicity, and in the face of defeat, one has to take one’s hat off to the way Samsung has competed with Apple and the iPhone 5. Both devices are indeed very solid in performance and design, and although Samsung would have feared the impact of its closest rival’s handset, it’s fair to say the company has taken everything thrown at it in its stride.

With new colors having also recently been added to the roster, the Samsung Galaxy S III isn’t going anywhere, and in the long term, looks set to be the biggest-selling Android device of all time.