Samsung and Apple are frequently at loggerheads in the courtrooms over numerous patent disputes, but while it has been established that both companies are unafraid to file a lawsuit or two, the two parties don’t always require the means of a court in order to get their respective points across. Often, Samsung will use an ad campaign to take a few not-so-subtle pot-shots at its biggest adversary, and in a plethora of new advertisements, has had yet another dig at the Apple iPad. There are four in total, with one even taking a swipe at the Amazon Kindle, and you can check them out after the break!

There’s no doubt that the iPad is at the top of the tree as far as the tablet market is concerned, and in order to generate publicity for themselves, rivals frequently point to the device’s flaws. Given that the Galaxy Tab Pro series is currently unrivalled by any Apple device (although a so-called ‘iPad Pro’ has been rumored for some time), Samsung has taken full advantage, giving several reasons why power users should ignore the Apple slate in favor of its own high-end product line. 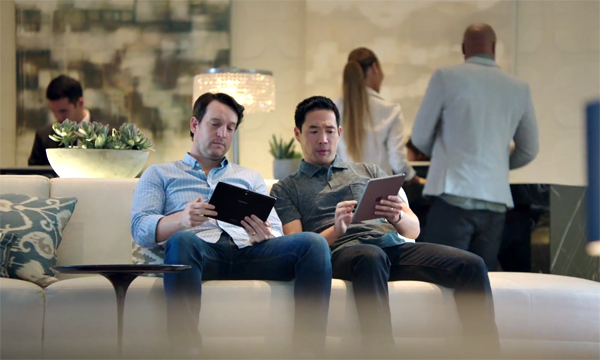 The first advert, named ‘Multi User,’ looks at the benefit of using a Samsung Galaxy Pro tablet over an Apple iPad Air. For one, multiple users can log in separately as they would an ordinary desktop computer, and this, in turn, makes it easier for folks to share a device whilst also managing their own settings and files.

The next ad is entitled ‘Pixel Density,’ and notes that the Galaxy Tab Pro series has more pixels than the competition, for a much clearer overall picture. The iPad, with its Retina display, is still sharp enough for most though, and with the market divided as to whether the Korean company’s AMOLED tech can stand up against traditional LCDs of devices like the iPad, the superior resolution doesn’t necessarily amount to a superior experience.

Samsung makes a legitimate point in its ‘Two Things at Once’ clip, which talks about the Multi Window feature of the Galaxy Tab Pro series. It’s certainly a facility that many iPad owners would love to have, and like the Multi User feature, brings a genuine computing experience to the touch-based environment.

What do you think about the videos?