Samsung is not a company that you’d say is unfamiliar with litigation, but while the Korean outfit tends to find itself in court accused by Apple of patent infringement, the Galaxy S5 maker has reportedly sued a newspaper of its native tongue for posting some unflattering coverage of its upcoming flagship. Given that the Galaxy S4 didn’t sell as well as the company had hoped, there’s added pressure on its successor to make amends, but while negative reviews certainly don’t help matters, Samsung’s decision to respond by means of a lawsuit does seem a tad extreme.

According to Korean publication MediaToday, Samsung has filed a lawsuit against Electronic Times, with the country’s foremost electronics manufacturer seemingly incensed by negative comments regarding the Galaxy S5’s camera. Of all the features added to the new Galaxy S5 handset, we’ve been perhaps most impressed with the rear-facing snapper – a 16-megapixel effort boasting, among other things, 4K video output. But Electronic Times doesn’t seem to agree, and while the newspaper has defended itself by noting that "the story fits the facts," Samsung is hearing none of it.

It’s generally the case, particularly across Asia, that companies get the support of their own media when launching a new product. By and large, Taiwanese publications will report favorably about the HTC One (M8), the Japanese press will highlight the positives of the PlayStation 4, and for the most part, negativity doesn’t reach the fore. However, in the case of the Galaxy S5’s camera, it has, and Samsung is not at all happy about it.

Often, newly-launched handsets are besmirched by reports of major issues, and with the aforementioned pressure on the Galaxy S5 to perform in the retail market, it’s clear that Samsung is panicking. At the end of the day, though, if the reports pertaining to the Galaxy S5’s camera are completely unfounded as Samsung is claiming, then in all honesty, it shouldn’t have too much to worry about. 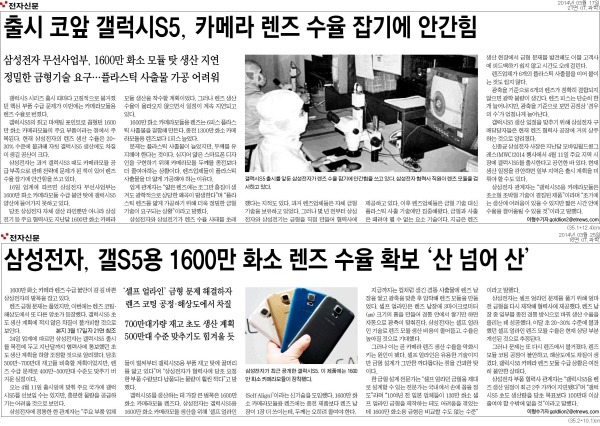 With everybody raving about the HTC One M8 and the iPhone 6 seemingly a few months away, it will be interesting to see whether Samsung’s mini-slump with the Galaxy S4 will be forgotten once the Galaxy S5 retails from Friday. The device itself has been the subject of some criticism for lacking innovation, but with a very powerful list of tech. specs and a shiny new gold color configuration to boot, it will still take a valiant effort from a rival to halt the Galaxy S5 in its stride.