It’s a well-known fact that Samsung spends copious amounts of money on advertising and marketing, and a good deal of that budget is commanded by adverts bashing rival Apple in one way or another. Two of the most influential outfits in mobile space, it’s not uncommon for each company to deliver several ads a year taking shots at the other’s products and services, and as such, it should come as little surprise that Samsung’s efforts to plug its Galaxy Tab S line includes a few not-so-subtle digs at the Apple iPad.

Of course, given that the iPad is nearing the end of its life cycle, a direct comparison with a significantly more recent slate could be deemed as unfair. Samsung, however, doesn’t care one jot, and in a departure from the usual name-calling, this latest ad actually includes a device that appears almost identical to the Apple iPad. Naturally, the large Apple logo seen at the rear side of every single Cupertino slate has been removed, but nevertheless, the iOS software and general form factor of the slate in question leaves the viewer under no illusions as to the gadget’s specifics, and after seeing a cute kid and his father fight over the iPad, the Galaxy Tab S’s multitasking features steam in to save the day. 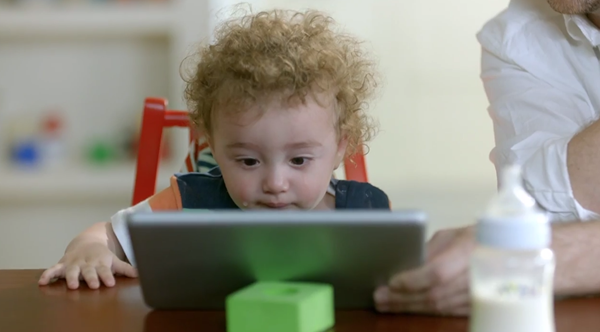 It’s actually quite an entertaining video, and while a toddler battling for use of an iPad with a fully grown man makes for a humorous sketch, it’s a scenario repeated the world over. Children as young as three are now getting sucked into the tablet market, and as such, families require something a little more shareable. The iPad is still, thanks to its lack of multitasking, a very personal device, but with Sammy looking to cater to groups of people as opposed to just the individual, it may appeal to a wider demographic.

By splitting the display, the kid in the video could keep up with his animated movie while dad remained abreast of the sports center, and as well as permitting more than one user to use the interface at a time, split-screen multitasking is also useful for those who, say, wish to browse the Web while also watching a movie.

As well as making the point of outlining the iPad’s multitasking shortcomings, Samsung also rolled out another ad taking a pop at the Apple slab’s display, which you may also find embedded below.