Considering that Samsung have been experiencing a little bit of ridicule recently thanks to the release of the monstrous Galaxy Note, which by the way features a stylus, they could do with introducing something publicly appealing at this years Mobile World Conference in Barcelona. The Korean company was widely predicted to be all quiet on the new product front at MWC due to the fact that they don’t have any official press events planned and that they actually pulled out on launching the Galaxy S3 at the event in favor of delaying for a more worldwide universal launch.

However, they have managed to shock us by introducing the Samsung Galaxy Beam smartphone which is a refreshed version of the original projector based handset but with the latest version packing some serious specification upgrades. The Galaxy Beam is able to boast a very decent specification packed into a 4-inch WVGA display. The internals of the phone host a dual-core ST-Ericsson Cortex A9 processor with 768MB of RAM which doesn’t represent a ground breaking device, but at the end of the day the device will be judged on its main feature – the built in projector. 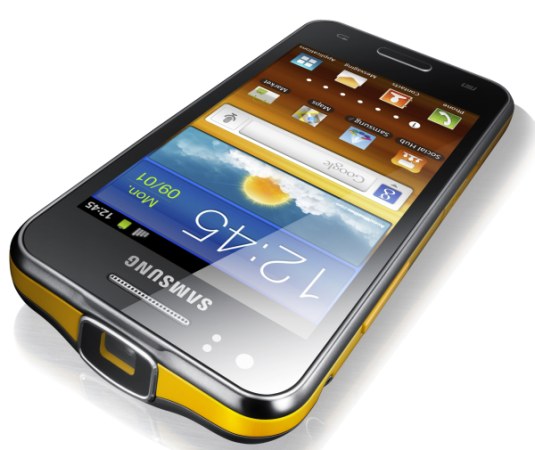 The internal project, located at the top of the device, makes use of a 640 x 360 resolution with a 15 lumen brightness and able to project an image that can be up to 50 inches wide. The projector will come in particularly handy for those who wish to share images or videos with friends or family, work based information with colleagues in a meeting or even just play your favorite game in 50 glorious inches instead of the built in 4 inch display. The handset itself is a stunning 12.5mm thick giving it the title of the world’s thinnest projector phone, although to be fair, it doesn’t really have a great deal of competition on that front.

Samsung have done a great job of managing to house the all important projector in a manner which doesn’t detract from the aesthetics of the phone and actually manages to remain attractive in appearance. However, Engadget notes that the project doesn’t feature any recess around it and therefore could be a bit of a fingerprint magnet, so be prepared to wipe it clean before you start to beam those images around the office.

The device will come with a decent 8GB of internal storage which should allow plenty of images and videos to be stored, allowing good use of the projector. It will also come shipped with Android 2.3 but as yet we have no official details of when the Galaxy Beam will be available to the world. From the released images of the Beam, it actually looks like a very accomplished smartphone and we are definitely looking forward to checking this one out in person.