We’re just twenty-four hours away from Samsung’s big unveiling of the Galaxy S IV, and the firm is kicking the advertising campaign into top gear. We’ve already seen plenty of leaks, as well as official invites to the press event and the like, but now Samsung has taken things to another level, in typical fashion.

In what can only be described as cheesy, and not dissimilar to previous Samsung methods, the Galaxy S IV has been pushed by a flashmob in New York’s Time Square.

During the male-only dance recital, we’re treated to a group of happy chappies prancing around in suits and hats, with big advertising boards suggesting that everyone should get ready ‘4 the next galaxy.’ Very clever Samsung. We see what you did there. 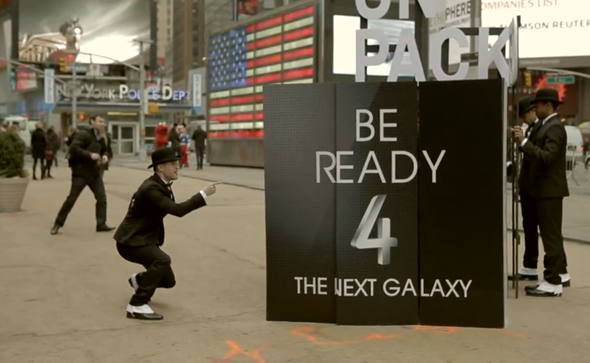 Unfortunately, all these stunts and over the top advertising pushes manage to detract from what is sure to be an excellent smartphone. Unfortunately, Samsung’s PR department appears to be a little off with its belief of how we like to be advertised to. On a side note, did anyone else notice the people filming the flashmob on Galaxy S IIIs? Yeah, subtle.

Samsung will announce its next Galaxy S handset at an event tomorrow, where the fourth generation unit is expected to be propelled to the top of everyone’s Android smartphone wishlist, even with strong competition from both HTC’s One and Sony’s new Xperia Z. New Galaxy S releases are hotly anticipated, with perhaps only new iPhones creating more buzz in the mobile tech arena. We’ll be keeping an eye out for all the news and views tomorrow, so be sure to check back then.

We won’t be at the event tomorrow, but let’s just hope that the goings on a wholly less cringe worthy than what we see coming out of today’s New York flashmob.