Today may become known as the day that Samsung announced the Galaxy S7 and Galaxy S7 Edge smartphones, but it also snook out a new camera in the Gear 360, and it’s intriguing indeed.

As the name might suggest, the Gear 360 is capable of taking full 360-degree photos and videos, with the obvious use of that being to create content for Samsung’s own Gear VR headset. Images and videos taken with the Gear 360 can also be viewed in 2D via Samsung’s mobile apps and while shooting on the Gear 360, users will be able to preview the content on one of the company’s compatible smartphones. As you might expect, the Galaxy S7 and Galaxy S7 Edge are top of that compatibility list.

Featuring a 72×32 display, built-in WiFi connectivity and not one but two 15-megapixel fisheye lenses, the Gear 360 is capable of taking either 3840 x 1920, 360-degree video, or 30 megapixel still images according to Samsung. All that data needs saving somewhere, so the inclusion of a micro-SD card reader that can take advantage of up to 128GB cards is a welcome bullet point on the specifications sheet.

Perhaps the most important aspect of the Gear 360 is its portability. Smaller than a baseball and weighing in at just 153 grams, the Gear 360 is intended to be small and light enough to go everywhere with you, which is something that could greatly improve this camera’s uptake. Nobody needs something big and heavy that will never make its way out of the home, but something this size can live in a bag without causing too many problems. 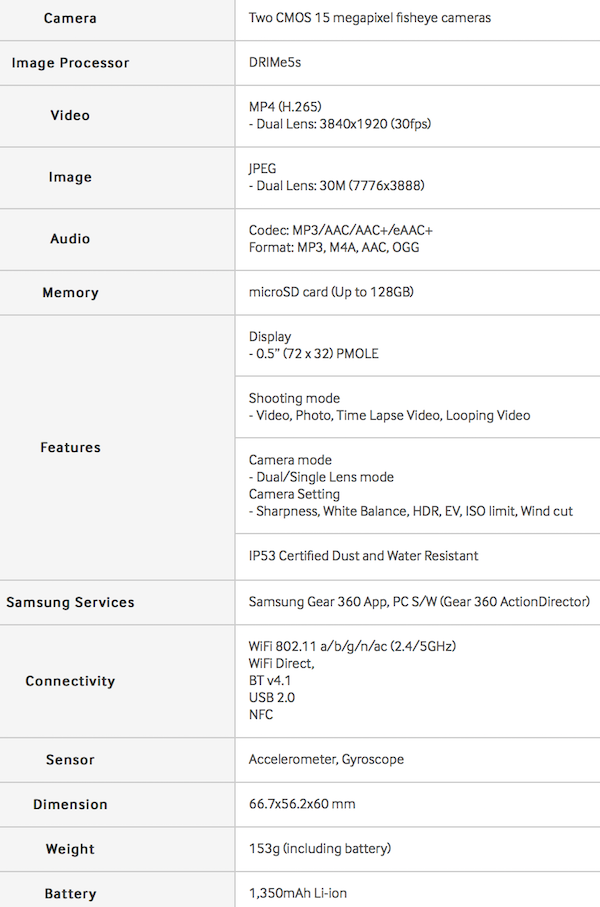 No pricing has been announced for Samsung’s new camera, but it will go on sale in selected countries some time in second quarter, between April and June. So probably May, then.