Even though Samsung is renowned for releasing a bunch of spin-off devices after every new flagship, we naturally thought that the South Korean company might skip the Galaxy S5 Active this time around. After all, the Galaxy S4 Active’s main draw was its dust and waterproof nature, and given how the standard Galaxy S5 is already both of these things, we naively touted the demise of the Active. However, a new video showcasing the Galaxy S5 Active in full working order suggests otherwise, and as well as being more rugged than its just-released cousin, is notably different in a few other departments, too.

The guys at TK Tech News have gotten hold of what is claimed to be the Galaxy S5 Active, and although this cannot be verified – particularly given the absence of as-yet any official announcement from Samsung – it does look pretty legitimate to our eye. 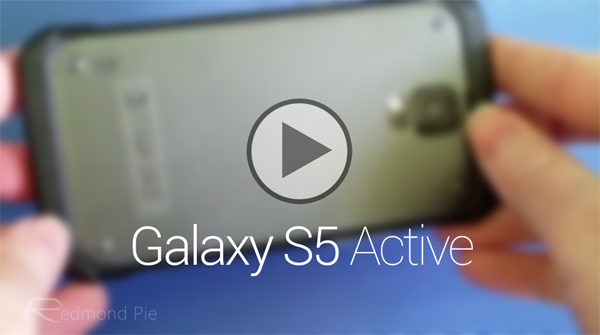 So, given the fairly ruggedized nature of the Galaxy S5, what makes the Active version different enough to justify a whole new release?

Well, for a start, it would seem that Samsung has retained the heart-rate monitoring system, although in turn, has done away with the fingerprint sensor. The whole design appears much sturdier and more robust than the original Galaxy S5 also, but whilst this gives the impression of a thicker profile, the TK Tech News videographer is also keen to note that it is indeed slightly thinner than the main model.

There’s a dedicated hardware button placed just above the volume rocker which can be used for the camera shutter, although through the Active Key app, can also be set to perform any action or task you could want, such as launch an app, toggle silent mode, or switch on the flash light.

There’s also a specialized Activity Zone app, packing features like compass and barometer, although this does appear to be a rather jumped-up version of S Health as opposed to anything significantly new.

Comprised of rubber and metal, it’s definitely better equipped for the elements, and while it mightn’t be considered a “premium” finish, it is, alas, not comprised of polycarbonate for a change.

Samsung is holding an event on June 12th, at which point, this handset will likely be unveiled.

Until then, what do you make of the Galaxy S5 Active?