The Samsung’s Galaxy S III rumor mill has been gathering plenty of momentum lately, and it’s not hard to see why. The hotly-anticipated device is set to feature a 1080p full HD, a 1.5GHz quad-core processor, and if the projected release frames ring true, will go head-to head with the iPhone 5.

The Samsung Galaxy S II is the most successful Android smartphone to date, and only recently won ‘Best Smartphone’ at the MWC 2012. As well as the award and popularity, the device also now supports the Big G’s latest and greatest Ice Cream Sandwich (4.0.3), after the mobile OS began rolling out to devices two days ago.

Reports on a release time have been somewhat conflicting, with some predicting April, while others a little later. The last coverage we gave of an ETA was earlier this month, when ZDNet Korea claimed to have confirmed the release date as indeed next month, in April.

Now Victor H. of Phone Arena has sourced what appear to be high-res renders of the upcoming device Galaxy S III. The image shows a sleek design, which could be even nicer in reality if the rumored ceramic finish bears fruit. The renders are unlikely to be real, but still create an exciting depiction of what Samsung could have in store.

According to Android Spin, the S III is rumored to be in production, which suggests the device will be releasing next month or, at latest, May. The Korean LCD will want to utilize the London Olympics as a marketing hub since it is a big sponsor, and although the Games don’t begin until July, the build-up and advertising is already gathering steam as we speak. 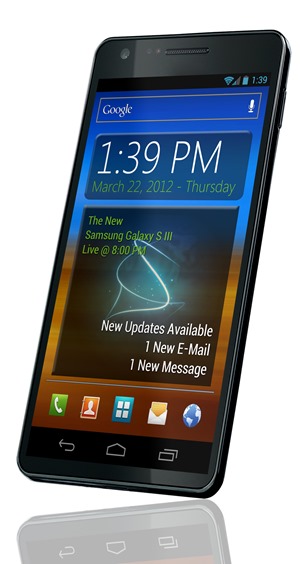 A Samsung spokesman declined to confirm the release bracket, which leaves us to play that familiar guessing game once again. With the iPhone 5 also set to drop in the coming months, though, Samsung will be keen to nab a few Apple loyalists with its next flagship device.

Excited? We certainly are!