And you thought Quad-HD resolution on mobile phones was truly overwhelming. Enter Samsung Galaxy Note 5 – which, according to reports, is rumored to come with a 5.9-inch display with an over-the-top crazy Ultra HD Super AMOLED display, also called the ‘4K’ resolution.

According to the folks over at Phone Arena, they got tipped that Samsung is working on a 5.9-inch Ultra HD (3840 x 2160) panel boasting of over 700ppi, with plans to mass produce the panel by August 2015. This basically puts the manufacturing plans for the screen right alongside the time frame for the Note 5 release. The Note 5 is expected to be revealed at the IFA 2015 event in Berlin next year.

So far the source of this tip remains unidentified, but last year at an event, the Korean electronics giant revealed that it was working on developing Ultra HD displays with a 3840 x 2160 pixel resolution, with plans for a 2015 mass production.

Apparently Samsung is not the lone runner in this race, with LG already eying 600 to 700ppi displays that the company says should be achievable soon enough. Even Sharp has been reportedly working on 4K displays for mobile devices within the 5.5 to 6-inch panel range.

Now the two questions that arise are: At 5.9-inch, how huge of a Note device are we to expect? And do we really need a mobile display at 700ppi?

For starters, if we are to believe that Samsung has finally taken a cue from iPhone and HTC One in construction of the next Galaxy S and Note series, hopefully the company will improve the screen-to-phone ratio to avoid making the device as tall as the Nexus 6. 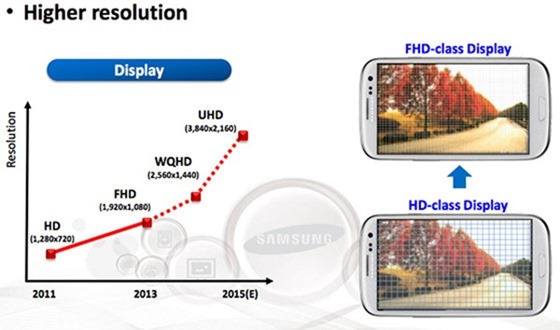 As for these increasingly wall-hugging resolutions for mobile phones that are putting pixels at 600 to over 700ppi, will users actually be able to discern one pixel from another? The only reason I can think where this might matter is when comparing a 400+ ppi display to a 700+ ppi display, which is pretty impractical.

Not to mention the battery juice and overall specs needed to push out this resolution. However, all of this boils down to a consumer’s choice and what is required and what is not, where Samsung must’ve done some sort of market research before jumping into this.