It’s official folks – Samsung has begun inviting press to its upcoming IFA 2012 event on August 20th. The event has been the subject of some announcement rumors of late, with everyone in general agreement that we will see a new handset come out of Samsung’s IFA event.

The handset that some expect to be announced is the Galaxy Note II, the sequel to the popular phone that arrived to much fanfare and comparisons with Android tablets due to its huge screen, rather, a humongous screen. 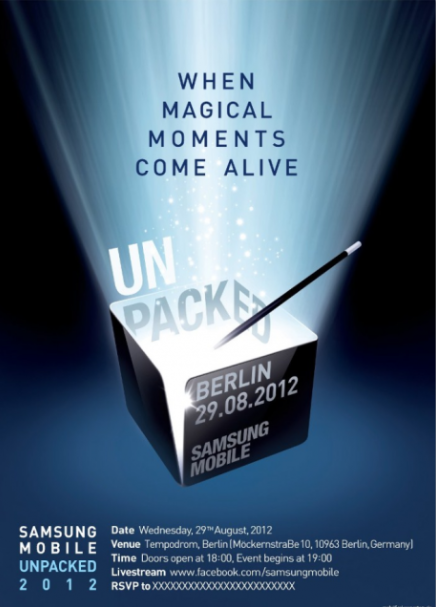 Those with invites to the event make mention of a wand-like implement on said invites, which could potentially be a reference to the stylus that the Galaxy Note is known for. It could, however, just be a giant coincidence and people are once again making non-existent facts fit their own agenda. Which one it is, we’re not really sure, but other money is being put on a separate event being run for the Galaxy Note II, with August 15th the date in question.

The Galaxy Note II is just one potential new product that may or may not make an appearance at IFA. With Samsung being one of the biggest makers of Android tablets we suspect the Korean company will take the opportunity to have another pop at Apple’s iPad with a new Galaxy Tab device. What size that will be, we don’t know, but we’re fairly confident that it will be at the center of an angry patent disagreement at some point during 2013. A fairly safe bet, we feel!

But if we consider older reports, the new Galaxy Note II will probably have monstrous 5.5-inch display, but that rumor is yet to squashed by the event itself.

We’ll be keeping an eye on the goings on at IFA this year, as we do every year, with new smartphones and tablets expected to be on the agenda from the get-go. We love a good smartphone release here at Redmond Pie, so we’re as excited as anyone else to see what we will be talking about come the end of August.

One way or another, it’s a fair bet we’ll be talking about that Galaxy Note II, too. But again, lets leave that for time to reveal itself.