Google Glass is definitely the hottest topic around at the moment, even if Google didn’t say much about the new technology during its Google I/O opening keynote. The internet is abuzz with stories from people who were lucky enough to get their hands, or heads, on one of the Explorer Edition of the product a couple of weeks ago. We seemingly can’t get enough of Google’s special eyewear, and it’s easy to understand why.

While Google may not have made a big thing about Glass during the opening stages of Google I/O, the company did hold a session entitled ‘Voiding your Warranty’ where Google’s brainiacs demonstrated some of the less publicized features of Project Glass. Namely, its ability to run Ubuntu.

If there’s one demographic Glass is aimed at, it’s techy types. And if there’s one thing techy types love, it’s installing Ubuntu on just about everything. It was really only a matter of time before someone came up with taking a version of the popular Linux build and slapping it onto the world’s most famous wearable technology. The fact that Google itself has done it just makes it all the more cool, if you ask us! 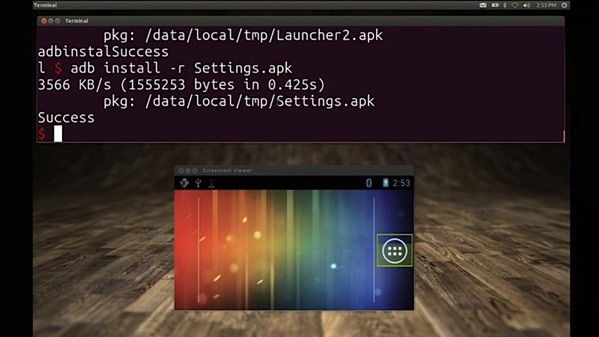 The process, perhaps predictably, is not a straight forward one though. We doubt everyone will be rushing out to do it, that’s for sure, and only the geekiest of Glass owners are likely to toy around with their $1500 purchase in such a manner.

For starters, certain Android APKs like Launcher, Notepad and Settings need pushing to the device via ADB, before pairing Glass with a Bluetooth keyboard and trackpad. None of that is a trivial matter if you’re not already well indoctrinated into the ways of hacking Android, and we’re only just getting started. 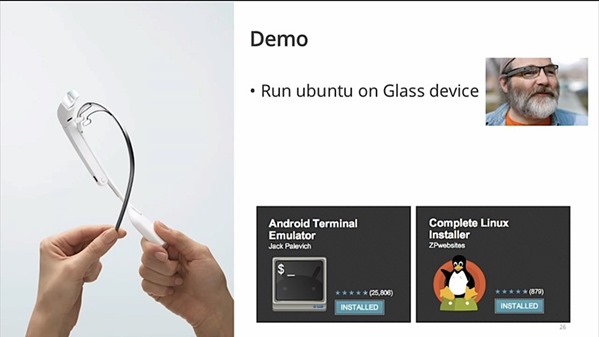 Google has posted a video of the presentation for all to see, and we recommend you do if you’re as geeky as us. You’ll need half an hour to spare, but it’ll be half an hour well spent if you ask us!