Developer frigid over on XDA has put together an awesomely powerful program which puts together functions like unlocking bootloader, gaining root access and achieving S-OFF (among others). The tool, which is called HTC Super Tool v2 and you can check out which devices it supports and how you can unlock the bootloader of, gain root access and achieve S-OFF on your HTC smartphone after the jump!

News of the tool comes from the XDA-Developers – a forum where the most dedicated Android developers and hackers – in the form of a blog post in which frigid’s tool is discussed.

Say hello to the latest creation from XDA developer: frigid. Known as HTC Super Tool v2, this bad boy roots a number of devices according to frigid, including:

The tool has been tried and tested with the devices mentioned above, but the developer states that it should work with other HTC devices as well due to similar architecture.

HTC Super Tool solves a big problem for HTC-toting Android enthusiasts who have to go separately search the internet for guides on how to unlock bootloader, root and gain S-OFF. Super Tool makes it easy to go through all of these tasks in one sitting. 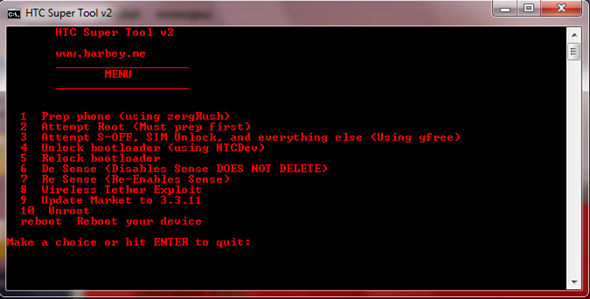 To get it working, you must first install HTC Drivers [MediaFire Link] on your PC. You must then enable USB debugging from Settings > Applications > Development. After that, you download the Super Tool RAR file [XDA Thread], extract it to the desktop and launch run.bat to get things going. When you launch it, you will see a menu, which includes options like attempt root, attempt S-OFF, SIM Unlock, Unlock/Relock bootloader.

If you have any queries, check out the official thread over on XDA.