The notion of Microsoft bringing its Office productivity suite to iOS has been long-standing, and while the Redmond-based company has, typically, revealed little with regards to its plans (if any), the release of OneNote for iPad earlier this year certainly seemed indicative of things to come. The Verge then waded into the argument in November by showing off some leaked images indicated Office could release for iOS early next year under a freemium model. Today, references to a slew of potential Office for iOS apps have surfaced on the software maker’s support site, and although the product tags depicted look to have been applied somewhat hurriedly, the spot is as strong an indicator as we’ve seen that Microsoft is plotting to release Office for iOS.

There are several examples of these references, including a document covering the ins and outs of custom numeric formats in the spreadsheet app Excel. The US wing of the support site, said document applies correctly to Excel 2013, but on the French support site, it shows as applying for Excel for iPad – an app that hasn’t even been announced, let alone released.

Running searches for anything related to iPhone or iPad throw up a number of intriguing results also, including such references as "Excel for iPad", "PowerPoint for iPad", and "Office Mobile for iPhone". No other details are attached to the notes, but still, it does look like the wheels are in motion.

Then again, it’s not as though documents and data have never presented the eager tech world with false-positives. For example, the User Guide of Apple’s iPhone 5 indicates an official Cupertino dock supporting the new Lightning-packing device, but that doesn’t look to be arriving anytime soon. 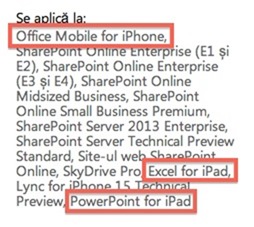 Still, unlike Microsoft Office – for which many are struggling to replace on their iPhones and iPads – there are plenty of dock alternatives for consumers to utilize in the meantime. The iOS world is, despite what some hardcore Apple fans will say, quietly anticipating the eventual release of Office for iPhone and iPad, and although Microsoft won’t comment on such a project until an official launch event, I do think that event, is now a when, as opposed to an if.