Rayman Jungle Run For Android Lands In Play Store, Brings With It Nostalgia And Epic Gameplay

Android apps, as we know, tend to arrive after the iOS iteration, and with Rayman: Jungle Run having recently released for iPhone, iPad and iPod touch, it was only a matter of time before Ubisoft’s classic title made its way to Google’s Play Store. That day has finally arrived, and for three dollars, you too can now enjoy a charming remake of the PlayStation and Atari favorite.

If you’ve played Rayman in the past, you’ll know how it works, but for the benefit of those who’ve never seen, or even heard of this strange looking character, perhaps a little background information is in order. In essence, Rayman is your typical platform title, and much like Super Mario et al, boasts its own unique set of tools rendering it distinguishable from others. The character Rayman can make a long range punch by spinning his fist a few times, and his eccentric, flesh-like hair also doubles up as a propeller, allowing him to float around like a chopper.

Rayman: Jungle Run separates Rayman’s powers (punch, jump, fly and wall run), and requires you to use one power to get through an entire set of levels, which can be a little unnerving at first if you’re accustomed to the old-fashioned Rayman title. Within each level, there are gold coins to collect, and if you manage to grab absolutely everything, you’re rewarded with red "teeth". You need a certain amount of these teeth to unlock further levels, so it is quite an unforgiving title, but its slight difficulty thankfully never spills over into outright tedium. 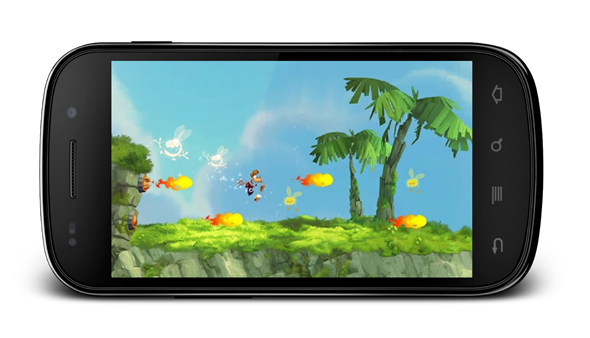 As well as being a lot of fun to play, Ubisoft has really worked on making the visuals as polished as possible, and the watercolor, Disney-like backgrounds will leave those old Atari players overcome with nostalgia. 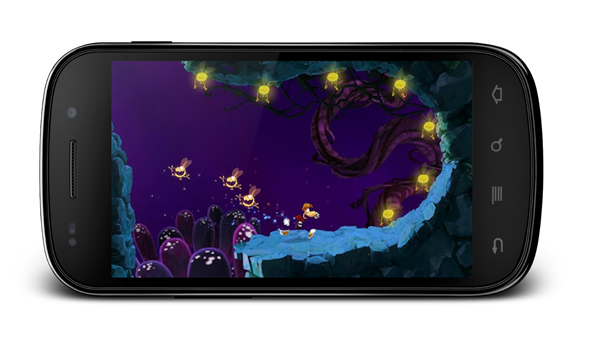 Because levels are short, you can pick-up-and-play at any time, but make sure you’re prepared to sit it out for the long haul, since it can be very addictive. Having played the iPhone version for the last two weeks or so, I’ve been unable to put it down, and highly recommend you download it via the link below.