With the iPhone 5 taking most of the iOS-based attention in the last ten days, some users may have forgotten about the power and versatility that comes attached with performing a jailbreak and using the available software that lives on the Cydia store. The QuickIM package from UnlimApps is one of the latest offerings to land in the jailbreak community and affords users the ability to integrate Facebook Chat and Google Talk into one single instance.

The main purpose of QuickIM is to give users one central location to host their conversations on the supported chat platforms, but also grant them the ability to quickly receive, compose and reply to messages. Although QuickIM is available on Cydia as a standalone app, it is extremely simple to use with an intuitive and very familiar looking native interface that is built around standard table views and navigation methods. 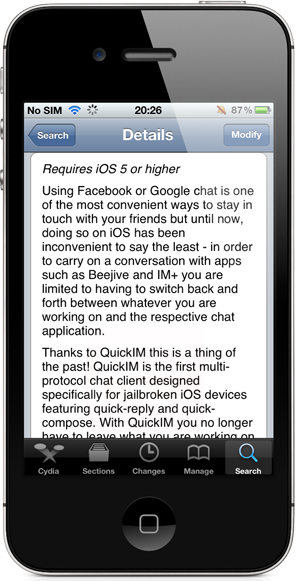 When installed, the app is split into a Buddy List, Conversations and Accounts sections which easily allow us to keep track of who we are talking to and what accounts we have connected. Adding either a Facebook or Google account is a simple case of entering the relevant details and accepting the authorization permissions that pop up on the screen. A simple toggle switch then allows the accounts to be flipped on or off without actually having to remove the accounts from the app and revoke permissions.

Buddy lists are organized in sections with contacts listed by who is available, away from chat or offline altogether, and when a conversation is invoked, it quickly moves to the Conversations section. QuickIM also integrates with Activator, allowing an action to be assigned to a quick compose feature of the app. This Cydia-based package will definitely provide some benefit to those who regularly make use either Facebook or Google Talk and the ability to just tap a banner notification and reply to an incoming message without having to leave the currently running app is a great feature. 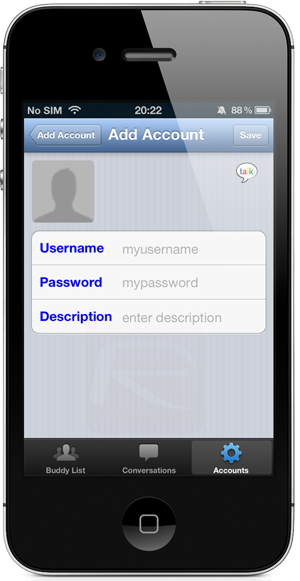 I imagine that the software would pick up a lot more users if additional chat protocols were offered other than Facebook or Google Talk, but that is something we will potentially see with future updates.

QuickIM is available as a free of charge download from BigBoss repo and requires a jailbroken device with iOS 5 or above installed.