The pull-to-refresh implementation that was first introduced into the iOS ecosystem by Loren Brichter has pretty much become the de facto method of refreshing tabled data within iOS apps, but it seems that Ryan Petrich and Sentry_NC have an altogether different way of using this control method by making Do Not Disturb accessible from Notification Center and the lock screen of a jailbroken device.

Jailbreak fans should be more than familiar with the work of Petrich and Sentry, both of whom have previously brought their design and development talents to a number of popular packages in Cydia. The latest is known as Luna and essentially allows us all to invoke the iOS 6 based Do Not Disturb feature through an interactive widget that implements the pull-to-refresh type interaction. Rather than going through the default route of accessing Settings and toggling the DND switch on or off, Luna makes it possible to simple invoke Notification Center and pull down from the top to disable notifications. 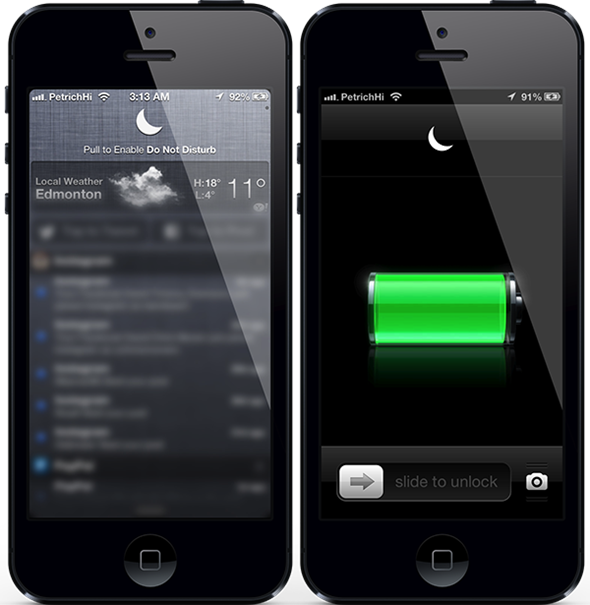 The package itself is more of a time saving feature rather than introducing any new functionality to the device. Jailbroken iOS 6 users already have full access to Do Not Disturb and can enjoy the peace and quiet that it brings by filtering incoming notifications based on specific rules. Luna also makes it possible to invoke Do Not Disturb from the lock screen of the phone through the same interaction processes.

Aside from the fact that Luna makes one of the features of iOS so much more accessible, it’s also great to see an interactive type widget that has a great deal of polish. The different highlighting in the accompanying text, and the fact that the crescent shape grows and shrinks in size depending on what stage of the animation it is at shows that a lot of design thought has been put into Luna. pull-to-refresh has proven to be extremely popular over the last few years and it looks like the developers of Luna will be hoping that pull-to-enable Do Not Disturb will be equally well accepted.

Luna is available as a $1.99 download from the BigBoss repository and requires a jailbroken device running iOS 6.0 or above to get access to the Do Not Disturb feature.