Samsung does pretty well to pack in some impressive specs into its handsets, in particular those of its flagship Galaxy S range, but even though the 2012-released Galaxy S III packs in a very workable 1GB of RAM, sometimes, it doesn’t seem to stretch far enough. Now, I wouldn’t count myself as a Galaxy S III “user” as such, for I have never used one as my daily runner, but I do interact with the device several times a week, and one thing I’ve noticed is that even though there is a gig of RAM, it does seem to get used up rather quickly, and naturally, this brings about the rather unwanted issue of lag. If you feel your device also uses up a lot of RAM but you’re uncertain of where it’s all going, we have sensitive information which could well result in the successful recapture of some of that precious random-access memory; details after the leap!

Often, it’s hard to pinpoint the root cause of an issue such as this, and often, we just learn to accept the fact that these problems exist, as opposed to trying to deal with them. But it needn’t be this way, and what you may not have realized, is that a silent, native implementation may well be siphoning precious megabytes or RAM from right under your nose, leaving you none the wiser.

You may well enjoy the water Ripple Effect, and why wouldn’t you? It’s calming, therapeutic, and most importantly, aesthetically pleasing. But what you might not have been so aware of is the side effect, i.e. the effortless manner in which this seemingly innocuous feature feeds off your RAM like a leech for blood.

Luckily, you can turn it off, and while this may not be such a saving grace if you still have a bunch of other processes keen to join the RAM parade, it will doubtlessly shed some of the burden. So, if you can live without the rippling effects, head over to Settings, then Security, then Lock Screen Options, and after that, locate Ripple Effect, and simply deactivate it. 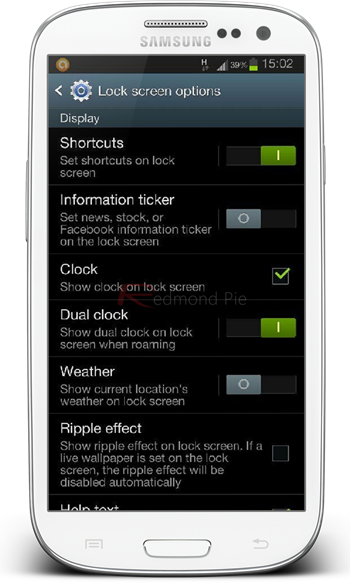 See, that wasn’t too hard, was it? Provided you make provisions to ensure that nothing else is sneaking up on your RAM, you should now be able to run your device without running it into the ground.

Did this work for you? Please do leave your comments below.