If you are a jailbroken iPhone or iPod touch user who loves nothing more than customizing and changing the aesthetics of iOS, then it could definitely be worth checking out the Athena package that has recently landed on the BigBoss repository. Many jailbreak fans regularly download and install full system themes that are then activated through WinterBoard to take care of their artistic pleasures, but Athena could be a great little alternative for those who just want some added eye candy on the app icons.

Installing Athena from Cydia basically gives each user a set of configurable options from within the native Settings app. It’s this new preferences panel that allows a multitude of different settings and effects to be applied to the icons in the hope of creating something visually appealing for the user. The tweak itself is broken down into four main sections which allows the user to change the color scheme, the Intensity of the effect, the blend mode of the applied color and the alpha of the icon. A combination of each effect can make for some rather appealing looking icons. 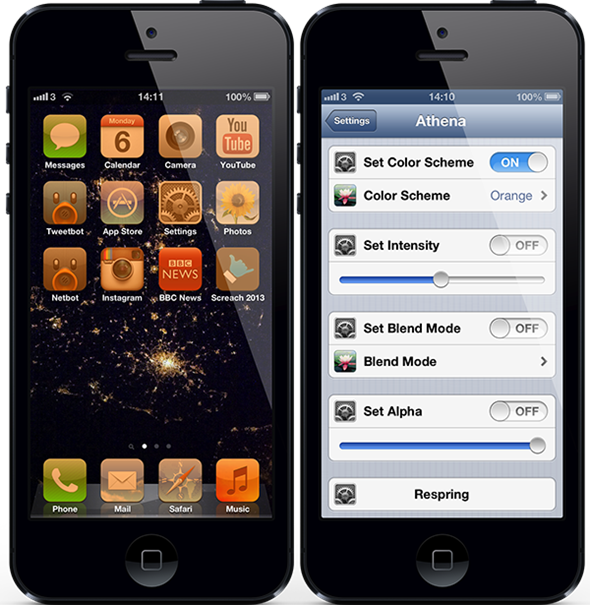 Anyone familiar with comprehensive graphic packages like Photoshop or Illustrator will feel more than at home, with the different blend modes that are available in Athena. We have the ability to apply a color overlay directly to the icons on the home screen and then apply a subsequent blend mode type such as Darken, Lighten or Soft Light. The intensity properties also allow for some surprisingly attractive icons.

Athena pretty much does a great job of doing what it says on the tin. The effects are customizable and the different options mean that a number of different effects can be applied just by tweaking certain things. However, it would be nice to have a real-time icon shown in the Settings app, so the user can actually see what they are applying. As it stands, it requires the changes to be made and a respring to occur before anything visual happens. Still, for $0.99 the package is definitely worth it for those into tweaking the visuals of the phone.

Athena is available as a $0.99 download from the BigBoss repository and requires a jailbroken device running iOS 6.0 or above.