A couple of pranksters pulled off a rather ballsy move by slapping on a Windows logo on an in-construction Apple Store in Hamburg, Germany yesterday. 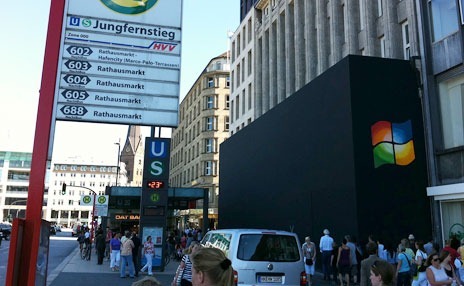 The group calls themselves .wav collection and they did this yesterday in the middle of a populated district in broad daylight.

The Apple Store that you see under construction is in the Jungfernstieg district of Hamburg, Germany. Apple is working on expanding their retail stores there. Fact: America has more Apple Stores than the rest of Europe combined.

Microsoft has nothing to do with this, we believe. Chief reason being that the logo is actually not really the actual Windows logo. If you look closely, you’ll realize that the green and blue tiles need to be interchanged.

.wav collection uploaded this video showing their prank in action:

I highly suggest planting the following line under the logo, “… works great on a Mac!” 😉