Over the course of the iPhone’s life, it had to undergo quite a bit of scrutiny in regards to its battery life, with a lot of analysts claiming that it often falls way too short of the estimated life which Apple claims in their literature, and seem quite proud about it in their keynotes.

This scrutiny has somewhat intensified since the launch of iOS 5.0, with many people feeling that it has significantly decreased the performance of their batteries on their iDevice. For the lucky few who are jailbroken, the PowerSaver tweak from Akhil Tolani could provide some comfort to the users who constantly find themselves without a functioning device thanks to severe battery drainage.

PowerSaver is a tweak that allows certain pre-defined user actions to be carried out when certain battery percentage levels are triggered. With a fresh installation of iOS, the system produces an on-screen alert when the battery drains down to the 20% mark and then again at 10%, but even then, all that it is does is; serve the user with what they probably already knew, their iOS device is about to hit the can. PowerSaver extends that functionality by allowing certain power hungry processes and system settings to be turned off at a certain percentage. 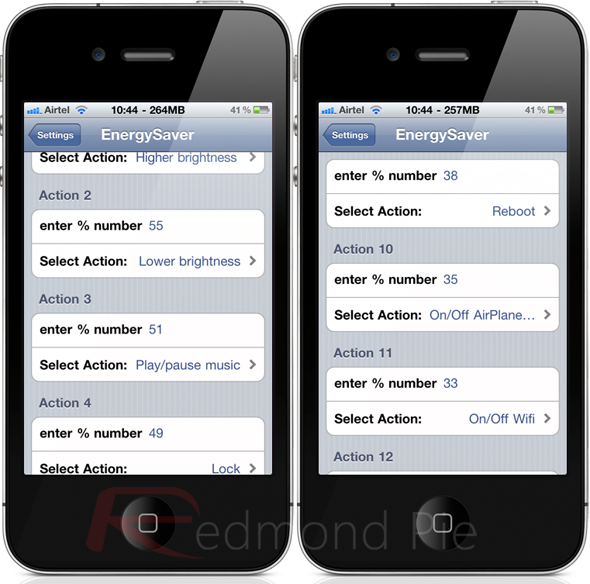 The tweak has support for up to fourteen unique alarms, each of which can be triggered when the battery reaches a certain level. An example of this could be setting an alarm to deactivate the Wi-Fi on the device when the battery level reaches 30%. Working out the key levels and switching off the right functions could be the key to prolonging the battery life when out and about.

Certain actions such as turning off Wi-Fi, respringing or rebooting the device, deactivating Bluetooth and much more are available with PowerSaver, with one of the main benefits of the tweak being that it doesn’t actually require any additional battery power to run, so that’s a huge plus. PowerSaver is available from the BigBoss repository at a cost of $1.50 and is compatible with all iOS devices running iOS 4.0 or above.