When Apple ships iOS 8 to the public next week, one of the features that it adds may not automatically get all the attention it deserves. Being able to use third-party keyboards can truly change the way many of us use our iPhones and iPads, but it’s destined to be one of those features that never really makes its way into the mainstream.

Thankfully though, that mainstream is a fan of the animated GIF, so third-party keyboard support may get some love amongst those who otherwise would be oblivious to its joys via the wonder of PopKey. 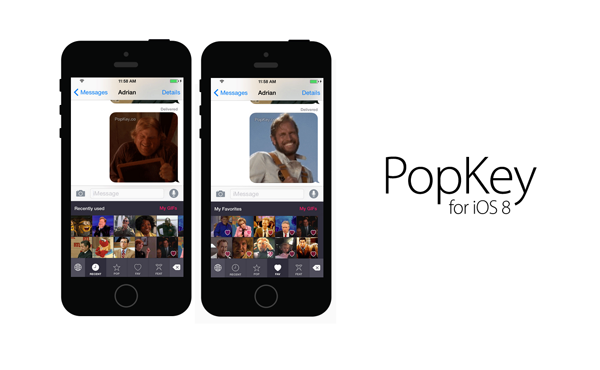 What PopKey does is install a third-party iOS 8 keyboard that instead of just giving us different ways to type those boring words. Instead, the standard QWERTY keyboard is replaced by a couple of rows of icons that, when pasted into things like iMessages, turn out to actually be animated GIFs.

The GIFs on offer are sorted into categories in a similar way to the built-in Emoji keyboard, and users can even add their own GIFs should they so wish. If you’ve ever found yourself wishing that you could simply send an animated picture rather than having to do with your own words, then you’re now very much in luck.

There’s no word yet on when PopKey will be available, or whether it will cost anything when it is, but we know we want it. Hard.

The addition of third-party keyboards to iOS 8 is just one of the new features that will no doubt make the new software update so popular amongst both power users and ‘normals’ alike. Shipping to the public on September 17th, iOS 8 arrives a day before the new iPhones and months before Apple’s newly announced Apple Watch will be available to those outside the company.

If you’re craving for more info on PopKey, then simply point your browser to popkey.co and enter your email address in the box front and center of the page. After that, you’ll be notified whenever the keyboard launches.