Great news Pokémon Trainers, Niantic Labs has yet more features coming soon to its extremely popular Pokémon Go title that will not only once again strengthen the game’s proposition, but also keep gamers coming back for more action.

As usual, the development house has once again documented the changes ahead of the release actually filtering through to the relevant app stores. Along with the usual bug fixes, performance improvements and general user-interface tweaks and modifications, Niantic will be introducing a new “Daily bonuses” feature that will instantly provide Trainers with bonuses based on performing certain daily activities.

These bonuses will be generated by performing tasks and activities that form the basic experience of Pokémon Go, but gamers will be rewarded more for consistency.

The real nuts and bolts of the game is about exploring the local environment to discover and catch Pokémon of different types. To that end, Trainers will be rewarded with 500 XP and 600 Stardust on a daily basis for catching a Pokémon. Add consistency into that equation and you end up with an even higher reward on top of the daily bonus, with Niantic offering 2000 XP and 2400 Stardust if a critter is bagged every day for seven days in a row.

PokéStops are another staple part of the Pokémon Go experience, and, as you might have guessed, Trainers will also be rewarded with XP and miscellaneous items for not only visiting a random PokéStop each day, but for also interacting with the spinning Photo Disc. 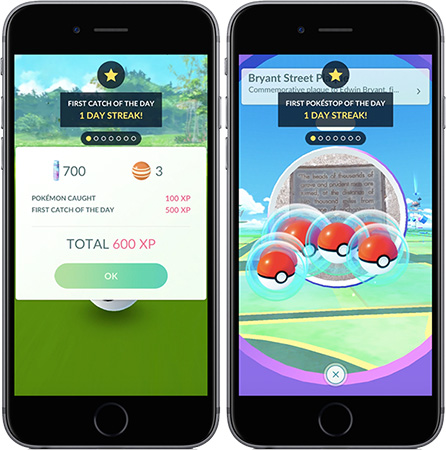 The new bonuses may not instantly seem hugely appealing or revolutionary, but gaining those valued XP for performing everyday Pokémon-related tasks will allow gamers to catapult themselves up through the various available levels.

Those bonuses will reset every day at 12AM local time. 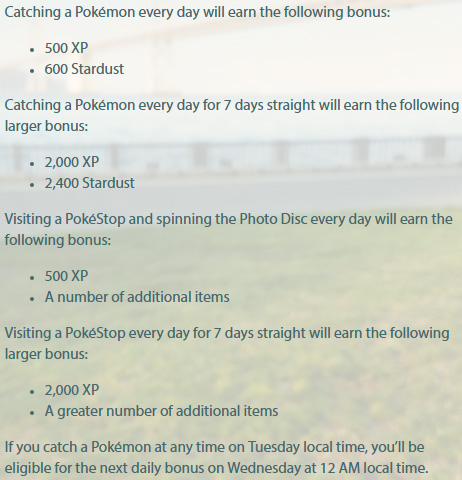 In addition to this new daily bonus feature, Niantic will continue to push Pokémon Go forward by improving the overall gaming experience, including necessary tweaks to iron out interface issues and improvements under-the-hood to ensure that it keeps appealing to gamers.

All these changes are expected to start rolling out to the iOS App Store and Google Play Store very soon.