PlayStation 3, Xbox 360 And Wii U Combined Into One Ultimate All-In-One Gaming Console [VIDEO]

Some people just like taking things apart, but that’s just half of the process. Once you’re left with a big bag of bits, you need to put it all back together again and hope that it works when you press that big power button. Putting it all back together and making it better than the original takes things to a whole new level, and that’s what Ben Heck has become so well known for.

Famous for taking all manner of electronics and tinkering with them to the Nth degree, Heck’s latest project sees the master modder turn three game consoles into just one.

For the project, Heck will take a PlayStation 3, Xbox 360 and Wii-U and put them into one case, not just saving space but also creating a work of art in the process. If you’ve ever seen any of Heck’s work, you’ll know what we mean. 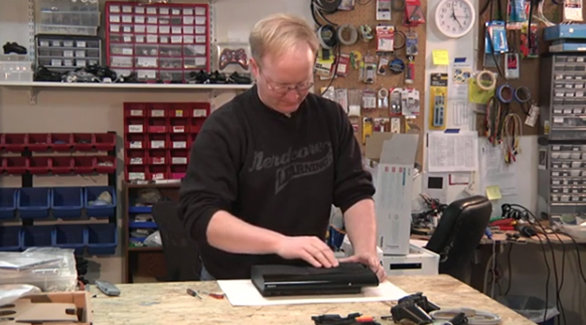 Fans of Heck, or just anyone who has a passing interest in gaming for that matter can keep abreast of proceedings thanks to the three part series that he is filming. The first part is available to watch right now, and details the first step of the process: taking everything apart in preparation for putting it all back together again!

Heck’s work is a prime example of why the modding community is so great. Even if you don’t think the finished product looks great, or solves a real space problem, there’s no doubting the skill and persistence that is in show. We’re certainly sure we couldn’t do what these people do.

At this point it’s a pretty safe bet that, come the end of the year, we’ll be writing about Ben Heck taking a PlayStation 4 apart and performing all manner of ungodly magic on it. We can’t wait to see what the finished article looks like in his current project first though, so we’re off to kick back and watch the first part of the journey again. There’s a trailer for part two as well, in case you just can’t get enough.