It’s a story that we hear all too often, not just in the iOS gaming realm but also in the more publicized, and often more costly world of home console gaming, but game piracy is a very real problem. 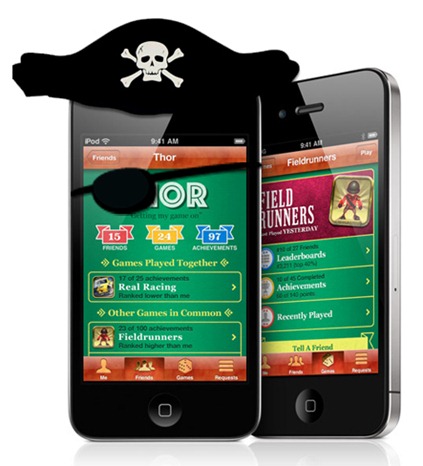 Now before anyone gets all upperty and tries to tell me that games are too expensive, and people just can’t afford a $60 game – let me relay a story told by TechCrunch today.

The story revolves around one independent iOS developer, going by the name of GAMEized.

All excited like, GAMEized released its new game, FingerKicks (a nice little football game, for those interested) into Apple’s cavernous App Store and proceeded to sit back and wait for their fortune to be made.

One problem though – according to Apple’s own numbers, just $97-worth of sales were made on the game’s first day, with sales continuing to drop after that.

Not convinced Apple’s numbers were right, the guys at GAMEized fired up their trusty iDevice and decided to take a look at Game Center rankings. Imagine their joy when they saw 5000 players, apparently playing their $0.99 game. They wouldn’t retire off the money, but it’s money worth having nonetheless.

Fast forward to pay day, when Apple releases its official sales numbers. How many copies had actually been sold? Just 160 that weekend. Odd, no?

Well, yes and no.

After a little digging, they discovered their new app was (un)fortunate enough to be a featured app on AppTrackr, part of the cracked iOS app scene.

Part of Hackulo.us, AppTrackr had basically offered up a free version of the app GAMEzine was trying to sell for $0.99. How does a developer compete with that?

In a further release, it’s clear they are fans of the iOS platform, it’s just a shame it appears to be suffering a little-reported piracy problem.

GAMEized loves Apple. As application developers, we invest enthusiastically in Apple’s tools and methodologies. We buy and use Apple’s machines, their peripherals and their accessories almost exclusively. When we decided to build FingerKicks, it was a foregone conclusion we would build it exclusively for the iOS and available only through Apple’s AppStore.
Apple has yet to reciprocate our devotion to them.

While there isn’t much to add to this story, what we will say is this: why, dear pirates, must you see the need to rip off a $0.99 app? Really, if that $0.99 is too much for you to pay for someone’s hard work, perhaps it’s time to re-evaluate your buying of smartphones, tablets and the like that cost hundreds of dollars. You’ll spend $499 on an iPad, but not $0.99 on a game to play on it?

Worryingly, we fear it’s becoming socially acceptable to steal games and apps, especially on smartphones. Perhaps a low price means a perceived lack of value, hence the willingness to steal the app in question?

We really aren’t sure, but we do know one thing – if we as a community continue to bite the hand that feeds us, these great developers will take their great apps, and go somewhere else.

Then what will you steal?