Third-party messaging apps like WhatsApp and Kik Messenger have become extremely popular on a world-wide scale not only because they are efficient methods of communicating, but also because they are truly cross-platform and allow users on different platforms to talk to one another. You can understand why the likes of Apple would want to keep its iMessage service purely within the iOS ecosystem, but it doesn’t look as though that is going to happen as a new open-source project called PieMessage is now coming to the rescue by allowing Android users to get up and running with iMessage communications without the need for an iOS device.

This isn’t the first time that a genius developer has decided to bring iMessage protocols across to the Android platform though. There has been other solutions too in the past, but their implementation was shaky at best, and most of them have now already fallen by the wayside. 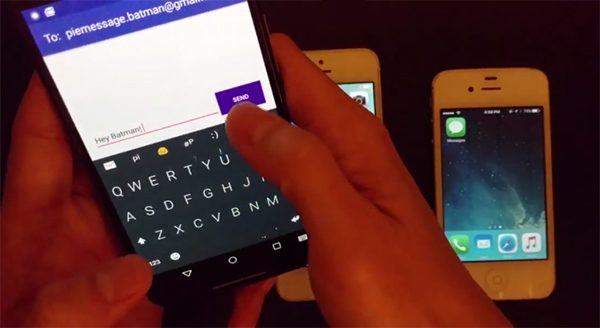 The biggest difference between PieMessage and previous cross-platform iMessage attempts is that PieMessage gets around the necessity to run everything through a third-party server by using user’s own Mac as server. This is an infinitely better solution as it allows the Android owner to use his/her own hardware as the intermediary server, rather than relying on a third-party offering to route the messages, which can not only be unreliable, but also very insecure. Also, this solution unlike previous solutions, doesn’t require any extra jailbroken iOS devices to work.

The app is not feature-complete just yet though, and therefore is only available for download as a very early alpha version. It is also open-source, and the code is available to download and consume on GitHub. Oh and it’s compatible through Android 4.0 to Android 7.0.

If you’re technically au fait, then you can check out the project for yourself on GitHub here. It includes all the instructions and everything you need to get up and running with PieMessage on Android.

The developer has also released a demo of the software in action, showing exactly what it is capable of. You can watch it in the video embedded below.