Apple has released another pre-released version of iOS 11.1 to individuals registered with the Apple Developer Program, which can mean only one thing; it’s time to see if iOS 11.1 beta 2 brings any noticeable performance improvements over the currently live version of iOS 11, which sits at 11.0.2.

As has become the norm, iAppleBytes has taken the chance to load up iOS 11.1 beta 2 and iOS 11.0.2 onto multiple Apple devices in order to see out how the in-beta firmware fairs against the currently live version. 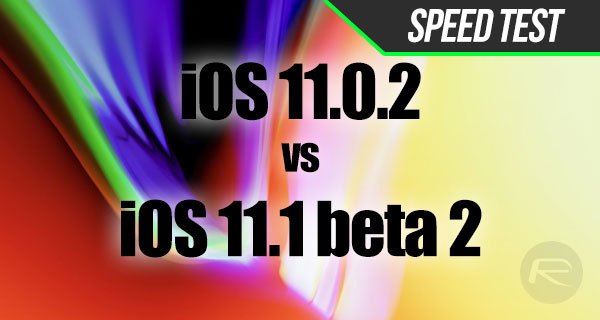 Apple took the initiative in releasing iOS 11.1 beta 2 just 48-hours ago. This release followed approximately 13-days after the initial beta, which is more than enough time for the company to try and introduce some meaningful change that could hopefully manifest itself with noticeable improvements to benefit the end device owner. iAppleBytes is looking to try and investigate that change by following its tried-and-tested process of loading up an array of Apple devices with each version of firmware and seeing which version performs the best.

This time around we are looking at iPhone 5s, iPhone 6, iPhone 6s, iPhone 7, and iPad Air, all running iOS 11.0.2 and iOS 11.1 beta 2, and all put through the same testing procedure to ensure that we at least get a semi-accurate portrayal of how they perform. The testing process is also the same on each device, regardless of age.

Each smartphone and tablet is booted up from a cold start with that action being timed. Apps are then invoked one-by-one to see how each version of iOS handles the invocation process of the apps. Finally, a second run through of app launching is performed to try and test how quickly each version of iOS can bring apps back to the foreground and load their data from multitasking switcher.

When watching the devices boot up, you can immediately tell that Apple has taken a backward step where iOS 11.1 beta 2 is concerned on older devices. iPhone 5s with iOS 11.1 beta 2 installed was significantly slower to boot than the same device running iOS 11.0.2 and even slower than iOS 11.1 beta 1 just two weeks ago. Some of that regression is made up by the fact that iOS 11.1 beta clearly shows improvement where app loading and animation is concerned, but we can’t imagine iPhone 5s owners being too happy about a device performing like this is if this level of performance ships with iOS 11.1 in the future.

Check out the videos for yourself and see if it makes you worry about the final release of iOS 11.1.