Pebble’s Smartwatch is credited with kicking of the current smartwatch boom. Having taken off on crowdfunding site Kickstarter and yielded the backing of over 80,000 interested parties, some of the bigger names in the tech game have rumored to be joining the fray, but while Samsung’s Galaxy Gear remains the only fruitful release thus far, the Pebble continues to cement its place as market leader. As part of a significant update to the wearable gadget and its accompanying apps, Pebble has announced some key updates to the corresponding iOS app, as well as support for gesture-based controls.

There’s no doubt that, with both Google and Apple looking set to join Samsung with their own smartwatches in the near future, Pebble really needs to up its game and establish itself as firmly as possible among the consumer market. Its success on Kickstarter was unexpected and, at least for a smartwatch, unprecedented, but since the launch earlier on this year, it’s fair to say things have been a tad quiet for a product that should still be basking in glory as a breakthrough device. 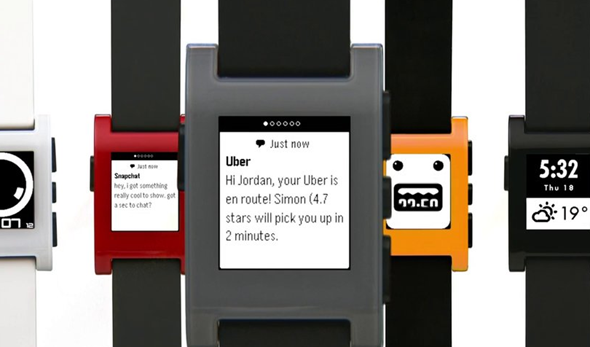 Hence: Pebble CEO Eric Migicovsky has revealed two major improvements to the Pebble platform as a whole, both of which should help to expand reach and improve the product for those currently in ownership of the smartwatch.

First and foremost, an app tailored to iOS 7 is in the offing that’ll provide an overall better service of notifications. The Pebble currently only supports calls, texts and emails, which great for most; iOS 7 support will bring the entire Notification Center in to play, so as well as the major social networks of Facebook, Twitter and G+, your Pebble will also be able support a wider range of apps.

Notably, the Pebble SDK is to be bumped to version 2.0, the take-home being that devs will see better access into the smartwatches hardware and software. This means controls and sensors will be greatly more accessible, paving the way for a potential flurry of fitness apps to possibly compete with the likes of the FuelBand from Nike.

With Pebble also working with the likes of Yelp, Foursquare and GoPro in creating specialized apps, these are exciting times for the company, and we’ll be keeping tabs on any further progress, so stay tuned.