When considering some of the major social networks around, those that may instantly spring to mind include Twitter, Facebook, and Instagram. But for every major hunt, there are literally dozens of smaller efforts vying for some sort of recognition, and Path, which has been available on Android and iOS for quite a while now, is definitely one of them. Although it has a unique, endearing interface and a wide range of features and quirks, it has continued to struggle, but with Windows Phone seemingly on the come-up having edged a little more market share in recent times, a Path app has just made a somewhat timely appearance over at the WP Store.

Path, for me, has always presented a bit of a dilemma. When I use it, I like it. It’s like a little bit of Twitter, Facebook and Instagram all rolled into one delightfully unique interface. The time and effort that has gone into the development cannot be faulted, but at the end of the day, it’s simply a graveyard with a few hardcore users really bothering to update their profiles and statuses. 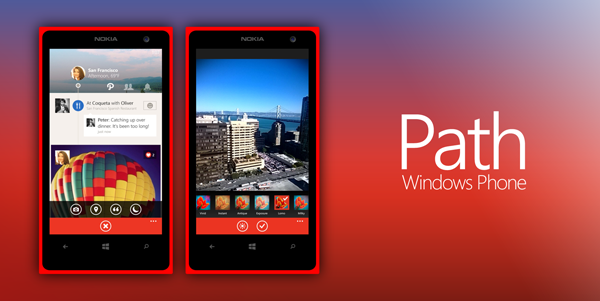 It’s a great shame, but with Facebook engaging more than one-sixth of the world’s general population in terms of monthly active users, and Twitter growing all the time, it’s hard to see how – with the likes of Vine, Instagram, Tumblr, Imgur, Reddit et al – Internet users could need any other means of connecting and sharing their lives.

Still, one has to give Path some credit for continually plugging away, and its development team has delivered a rather beautiful Windows Phone app. We’d expect nothing less, really, when one considers that not only are most WP apps aesthetically on-point, but both the Path for Android and iOS apps are consistently strong through every update.

As with a lot of apps that make the jump from iOS / Android to Windows Phone, the Path app keeps much of its charm and appeal while also fitting in nicely with the square design of the Redmond’s mobile platform. 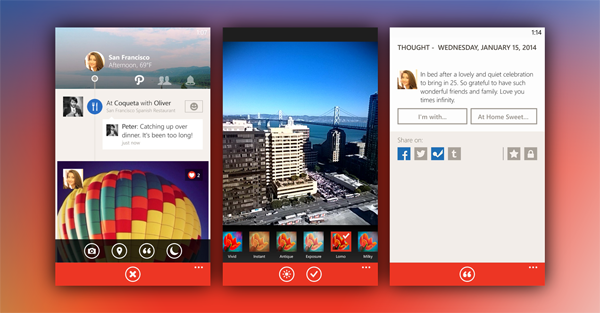 Path on Windows Phone is, when you think about it, a well-suited match. Both are nice to use, and have gained much critical acclaim for their design and functionality, but the common denominator is simple and damning: scarcely anybody uses either.

Still, if you do, you can grab the public Beta of Path for Windows Phone below.