With Windows 8 well and truly on the way, app makers will now be thinking about how their apps will fit around the new infrastructure. Microsoft has the obvious advantage of having built Windows 8 from the ground up, and has offered a preview of its famous OneNote app, called OneNote MX.

OneNote only recently made its debut on the iPad, and although perhaps not regarded as important as the likes of PowerPoint, Word, or Excel, still plays an important role in Microsoft’s wide variety of productivity-aimed apps.

One of the nicest features of Windows 8 is its Metro user interface, and as you can see from the screenshots below, OneNote X looks just wonderful as a Metro-fied app. 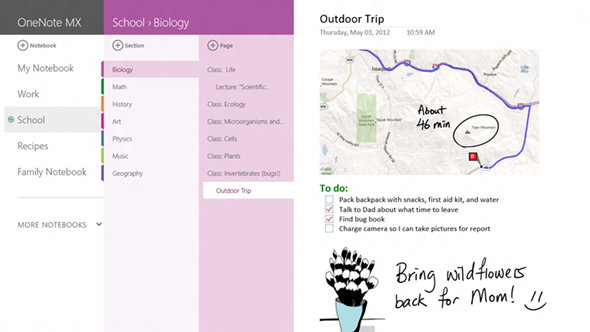 Cloud technology, or, specifically in Microsoft’s case, SkyDrive, will play a key role in most of the Redmond company’s software ventures moving forward, and with OneNote MX, you can readily save your notes into the cloud and access them as and when.

Making lists is as simple as has ever been with OneNote, and the checkbox feature thankfully remains a fixture. A lot of note-taking apps, I find, miss such a feature, but when one is trying to be productive and get things done, the ability to tick things off is something of a necessity.

OneNote MX will be an ideal application to try out the advanced pen technology Microsoft has promised with the Surface, and if you’ve become accustomed to OneNote’s advanced, streamlined array of formatting options, OneNote MX will not let you down. 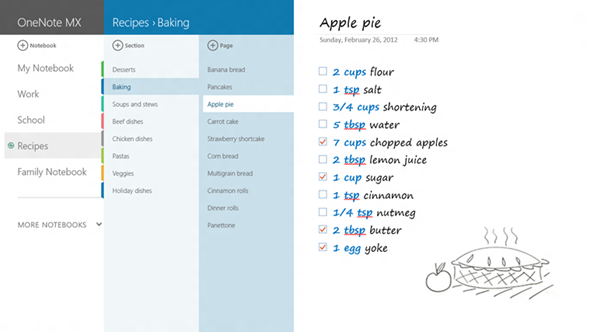 It’s available to download right from the Windows Store (found in the Windows 8 Release Preview), so download it, give it a try, and be sure to let us know if it does indeed live up to your expectations by dropping us a comment on our Facebook or Google+ pages, linked to below.