In what must go down as a real coup for all couch potatoes, an official Pizza Hut app has just landed for the Xbox 360. What it means is, aside from nipping off to the bathroom, you won’t actually need to leave your armchair for the entire weekend, provided it’s one of those recliner chairs that allow you to quickly morph into a sleeping position. Notice how I didn’t mention taking a shower? Let’s just say, I have seen gamers on a binge, and aside from seldom being a pretty sight, the accompanying smells within a gamer’s lair often do leave much to be desired.

If you are a big gamer, it’s almost a given that you’re partial to a slice or two of pizza. The minor inconvenience of getting a little bit of grease on the d-pad is offset by the break you get when you’re subsequently head-shot, allowing you to scoff down a little bit more of that delicious, cheesy delicacy. Unlike other foods, you don’t really need to break from your gaming marathon to refuel the old engine, and since you now don’t even need to pick up the phone to call up your local Pizza Hut, your pepperoni-clad slices can now be demolished with very little interruption.

Whether pepperoni is your passion (sorry, ardent Domino’s fan right here), or whether you’re more of a New Yorker, this all new Pizza Hut app for Xbox will help you get the order you want delivered straight to your front door as quickly as possible. It is absolutely free to download over at the Xbox LIVE Marketplace, and if you find using the telephone to be a little bit too much of a strain these days, the world famous pizzeria has you well covered. 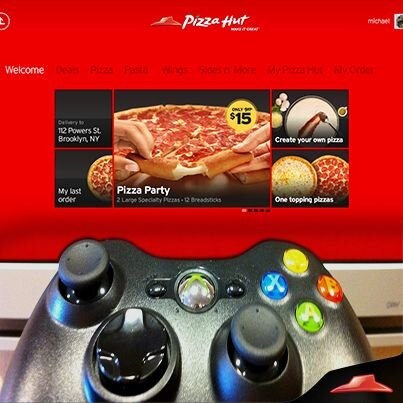 Certainly wouldn’t mind seeing a Domino’s app hit Xbox LIVE at some point in the near future, just in case gamers decide to order a Meateor or similar. Still, this will most certainly do nicely for the time being, and I strongly urge all pizza lovers to head over to the Xbox LIVE Marketplace and grab this brand new app right now.

And also, bear in mind that if you order from the official Pizza Hut Xbox app, you’ll get a 15% discount!