The Gangnam Style music track might be the most immediately recognized sounds of recent times, but without the power, that is YouTube, it is extremely likely that the majority of us would have never even heard of it. There’s a good chance that the majority wish they never had heard it, but gathering the momentum of a runaway steam train and becoming the most viewed YouTube video of all time has propelled PSY’s track into a worldwide phenomenon, and now thanks to the official Gangnam Style live wallpaper app, Android users can ensure that they are never without a small piece of that horse dance in their lives.

It may cost $1.99 to download, but this is one those rare opportunities for Android smartphone and tablet owners to grab themselves pop culture history by acquiring the only official Gangnam Style wallpaper app that brings the phenomenon directly to the mini screen of the device. What’s more, the download even comes with a ringtone thrown in for good measure, so not only can users show off their love for PSY, but they can also declare their status as being the number one Gangnam Style fan by audibly projecting the tune every time a phone call is received. Good stuff.

Putting all sarcasm aside, the app might actually prove useful to a lot of people who happen to prefer their smartphone experience to be handled by Android and actually enjoy the video and dance moves which come attached to the worldwide chart topper. The app itself brings a desktop wallpaper that is designed to look like the elevator doors from the official music video which slides open when touched. To the delight of all who install it, the elevator contains the famous dance being relived right in front of your very eyes. 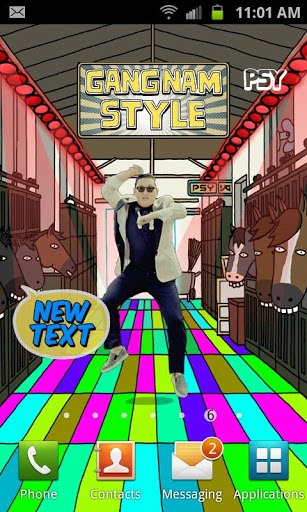 Apart from the elevator scene, the official app actually has a nice little feature that that watches out for text or Gmail based notifications. When the device receives one of these two incoming transmission, pop disco merriment breaks loose and the screen lights up with disco fever. The internetz made PSY and Gangnam Style a worldwide hit that isn’t looking like subsiding any time soon, so Android users may as well embrace it and use the app. 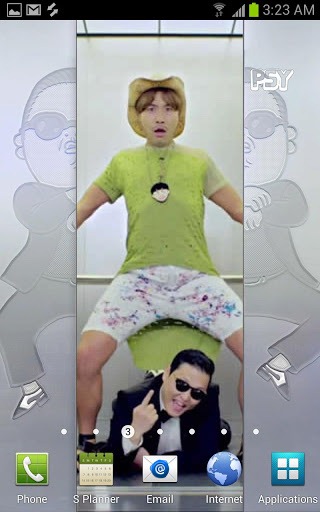 (Source: PSY GANGNAM STYLE LWP and Tone for Android on the Play Store)