Nintendo’s brand new Switch gaming console has only been publicly available, but its already garnering a lot of attention, both from welcome, and presumably unwelcome sources.

Consumers are flocking in their droves to take ownership of the console in order to play beautiful games like The Legend of Zelda: Breath of the Wild, but it seems that the console has also attracted attention from security researchers and hackers looking to see exactly what can be done with the console, and if it can be liberated from a security perspective. And it looks like it can, with relative ease, as proved already by Luca Todesco.

With Apple’s modern iOS devices running iOS 10 cracked, thanks to the release of yalu102, it seems that Todesco, and other developers, have been looking for a new challenge.

As if by magic, Nintendo has stepped up to the plate with the release of the Switch, which not only provides a brand new piece of kit for gamers to sink their teeth into, but also for hackers to investigate and see what is actually possible. A tweet by Todesco with the text “that’s just how it does”, is accompanied by a picture of a Nintendo Switch after successfully running his jbme exploit.

Given the fact that the Switch is literally eight days old, there is definitely no jailbreak or homebrew community already set up for this hardware. With that in mind, it basically means that in the current state having access doesn’t specifically allow the average owner of the Switch to do a great deal, but it does show what is actually possible with this current version of the Switch hardware and firmware, and it could potentially open up the door for developers to seriously consider building non-official software, tweaks, and experiences for Nintendo’s latest hardware. 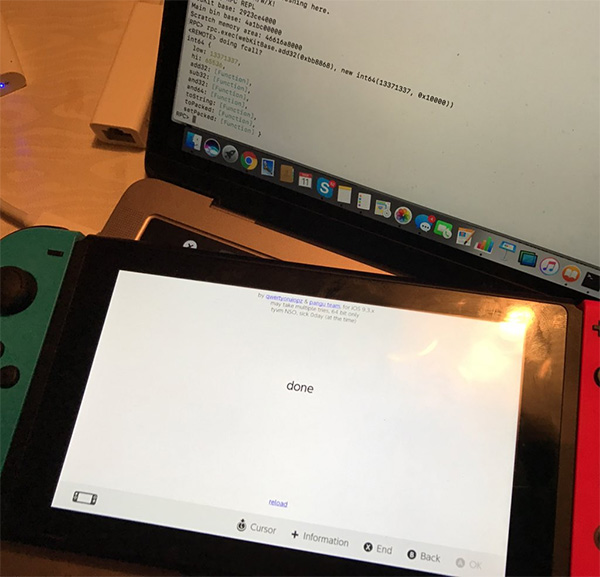 Of course, Nintendo wouldn’t like that, but if it actually happened it would likely result in sales of the Switch hardware increasing.

There’s no additional information on the Switch jailbreak provided at the moment other than the fact that it was an existing exploit that was used “basically untouched” with the removal of specific iOS assumptions. With Todesco’s focus now on Switch, we imagine that there will be more to come from this one.