Sponsorship is a big deal when you’re a technology brand, and aligning yourself with the right people can be a game changer in the long run. That’s why Bose has signed a new marketing deal with the NFL, giving it access to the huge potential audience that could see its sales take off from where it’s already at presently. It’s also a deal that damages Bose’s competition, and that’s never a bad side effect to have.

That competition is mainly Beats, the company that Apple recently bought and appears set to keep running as a separate entity for at least the time being. Beats has long been the headphone brand of choice for the A-listers of the sports world, with plenty of Beats ads featuring NFL players in particular. That’s now likely to stop completely, after it was revealed that NFL players will not be allowed to wear Beats headphones during anything that involves a TV interview during not just games, but also training camps and practice. The ban extends to a full 90 minutes after the event has finished, too. If you’re asking us, that’s a lot of minutes to cover. 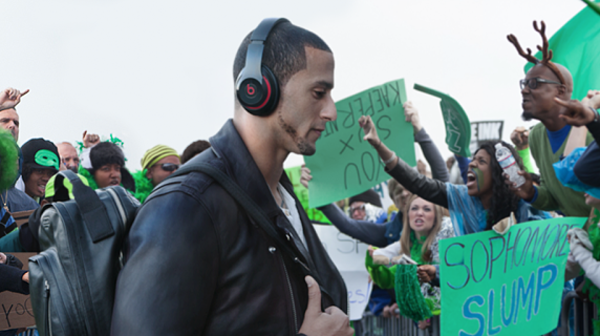 Beats has managed to build a brand that is often found around the necks or heads of sports starts as they prepare for big games, supposedly using them to focus before heading out onto the field of play. The cynical amongst us wonder if there isn’t an element of sponsorship at play here, too, but if you’re an NFL star it looks like you’re going to have to be much more careful about what you’re wearing when on TV for fear of upsetting the NFL Gods.

And you wouldn’t want that.

We’re sure the mansion, fast cars and not having a care in the world will make up for not using your oversized Beats, though.