Nexus 10 Toolkit Lets You Root, Backup, Unlock Bootloader And Just About Everything Else

As with iOS and Windows Phone 8, quite a few Android devices have launched in quick succession over the past couple of weeks, and as such, the famously thriving Android community has been busier than the gadget retailers this holiday. Among the torrent of new Android smartphones and tablets arrived the Nexus 10 slate, and with a toolkit for the HTC One X+, HTC Droid DNA and its accomplice – the LG Nexus 4 – already released, it only seemed a matter of time before the all-in-one arrived for the Nexus 10 tablet. Today, that day has arrived, and if you want to get busy modding and playing around with your shiny new slate, the folk of XDA-Developers have just made things that little bit easier.

With most of the new smartphones already having gotten their toolkits, it certainly hasn’t taken long for the Nexus 10 to receive an all-in-one of its own, and of the recent releases of modding assistants, the Nexus 10’s is about the most feature-rich. 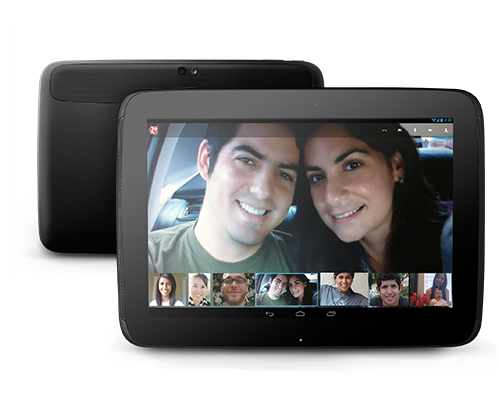 XDA-Developers toolkit master mskip is responsible for the release of the Nexus 10 toolkit, which is capable of doing almost anything you could ever want to do. Whether you wish to backup/restore a single package, or indeed all of your apps, data and internal storage, you can easily do so with this tool.

Unlocking and re-locking your bootloader, rooting stock Jelly Bean builds, taking Nandroid backups, and installing BusyBox are just a few tasks you can perform with the toolkit, which, if you donate to the developer, will receive automatic push updates.

Toolkits are seen as ideal for those with little technical experience in the field of Android modification. If you want to root or unlock your bootloader – two of the most common things you can do with an Android device, the toolkit is a great way for you to ease yourself in, and should you wish to take it further and try some of the more in-depth alterations, the toolkit is there ready and waiting. 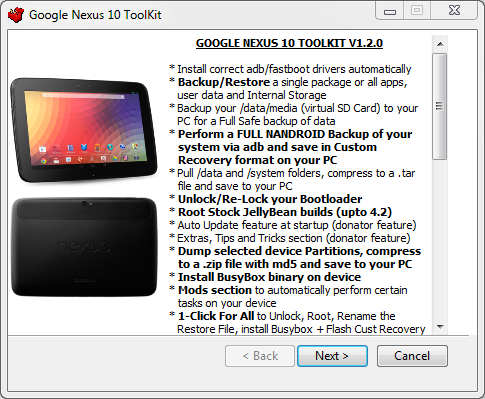 For more information and download link, please head over to the original thread on XDA. Should you get stuck while using the toolkit, the guys over there are extremely helpful – even to noobs – so don’t be afraid to ask for assistance.