Next iPhone’s Internal Components Compared Against The iPhone 4, 4S [IMAGES]

With the release of the next-generation iPhone just around the corner, we could be forgiven for thinking we already have a pretty accurate idea of what Apple is going to introduce to the world next month. Over the last few months, we have been treated to regular viewings of leaked images of individual components, as well as a few documents that claim to show the new iPhone assembled in all of its beautiful glory. Of course, the fully assembled images could all be part of an elaborate ruse to throw us off the scent, or may even just be a shell prototype that is distributed to official equipment manufacturers to design and build their wares, but they have succeeded in making us anticipate the release.

Thankfully, today has been a day like any other with more interesting images emerging from the darkest depths of the technology underground to show us some additional component images that are speculated to be part of the sixth-generation iPhone. There wasn’t any real great surprise in the pictures and almost everything contained within we have already seen in previous leaks, apart from one curious looking metallic back plate which we believe could be some kind of screen protection part. But how do these components compare when stacked up against the same part in previous iPhone models?

Some additional imagery that has come from the same source which brought us this morning’s pictures are now showing the internal new iPhone components alongside the same components from the iPhone 4 and the iPhone 4S to see just how they compare. The first row contains the electric motors which Apple have used in their iPhones to provide us with vibrating feedback that is used when the device receives an incoming call or a text message. The visual different between the iPhone 4S and the part being used in the new device is immediately apparent with the next-generation iPhone reverting back to a similar setup that was found in the iPhone 4. 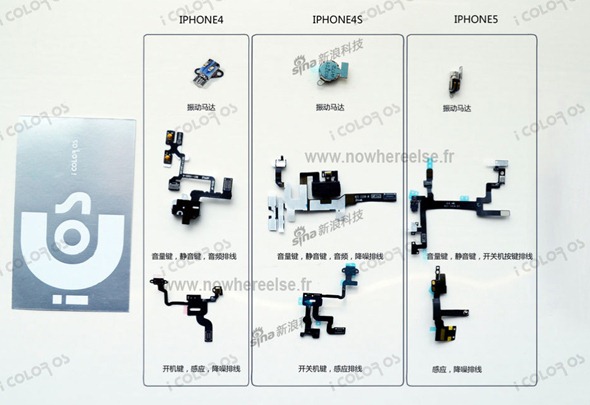 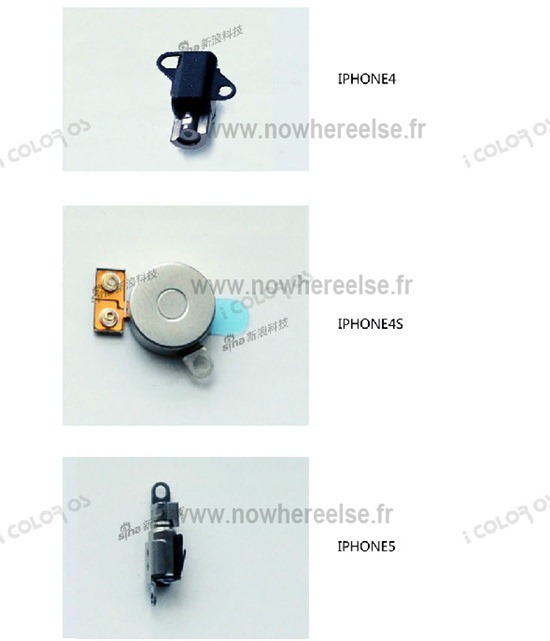 The shuffling around of the headphone port on the new iPhone has also resulted in a much simpler design for the internal flex cables that are required to bring power and functionality to the individual inputs that are found on the device. When looking at the internal cables and components of the up and coming iPhone, it’s hard to imagine and feel the magic associated with it, but when in a finished manufactured state we have a feeling this will be the best iPhone yet.