Anyone who is remotely interested in the release of next-generation Apple hardware must have been paying particular attention to all of the leaked images and reports that have been circulating around the world wide web for the last couple of months. Various sources have thrown up a plethora of photographs which show varying parts, that are speculated to be part of the sixth-generation iPhone, and will more than likely be introduced to us next month.

The new images, which have come into the public domain early this morning, show most of the parts that will make up the external fascia of the device, including the front panel of Apple’s next masterpiece, as well as things like the nano-SIM card tray and the black and white variations of the home button that is used to exit out of apps and get back to the main iOS interface. The image also includes a number of sensors that will be built into the iPhone itself, presumably to handle things like device orientation and ambient light.

One of the interesting things about the bundle of parts and components that are shown in the image is the inclusion of a device-sized piece of metal that doesn’t seem to have surfaced in the past. The thin piece of metal, coated black in these images, seems like it could possibly act as some kind of protective shield for the larger display which Apple is intending to ship this next iPhone with. The rumored change in screen size has caused mixed reactions amongst the smartphone loving world, with some users believing that the time is right to produce an iPhone with a larger display, considering all previous models have featured the same sized screen. On the flip side, some hardcore fans believe that Apple is bowing down to pressure placed upon them thanks to smartphone rivals Samsung producing a range of top-end devices that feature mammoth displays. 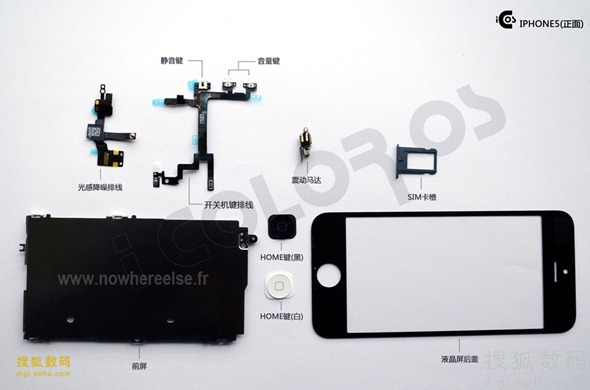 Whatever your personal opinion may be on the matter, it looks like the device will definitely feature a display with a larger vertical dimension, something that could possibly end up as a protective shield or as part of the internal design. Although we have seen renders, mockups and leaks of a fully assembled new iPhone, we are largely in the dark side about any possible internal design, meaning this thin black metal component could be used for a wide number of uses. Whatever the use, September 12th looks like the day we will get all of the official details.