I was never one of those iOS device owners who got caught up in the Angry Birds phenomenon, but judging by the staggering sales and usage figures which Rovio has reported in the past, it seems that the majority of the iOS device owning world have gotten onboard with the ornithological mayhem at one stage or another. The original Angry Birds game saw a huge shift in the mobile gaming world with Rovio’s success with what is essentially quite a simple idea, proving that there is definitely a market for serious game developers within the mobile ecosphere.

Although the main hype surrounding the original release of the game has significantly died down, it is still a much-loved creation with subsequent releases like Angry Birds Space proving to be just as popular as the original. Although, I personally have never subscribed to the iOS version, I do have to admit to having a little bit of a secret passion for loading it up on the Mac in periods of internet down-time and seeing how much destruction I can bring by flinging through little birds around the screen. If you happen to secretly share my hidden passion, then the invention of a rather unique and awesome USB-based controller will definitely bring a smile to your face. 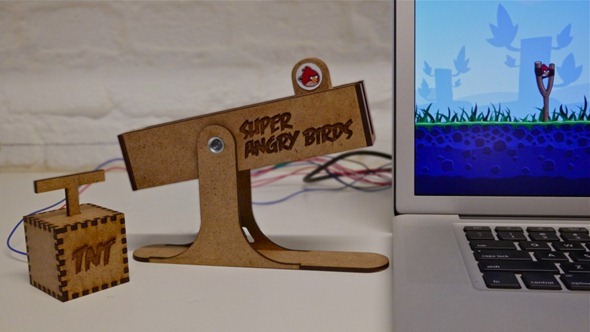 Andrew Spitz and his project partner Hideaki Matsui have pieced together a force-feedback USB-based controller that rather impressively mimics the feeling of a an actual slingshot while still managing to offer control over all of the abilities that you would find in the game through using a Magic Mouse or a connected Trackpad. The controller itself allows total control over the angle at which the birds are fired at, the length of pull to be applied and also the ability to invoke any special powers that are attached to those yellow, blue and black birdies.

The end result is a fantastic little device that allows one of the world’s most popular games to be played in a whole different way, but behind the scenes, it isn’t all gameplay and pig blasting adrenaline fueled fun. The controller is actually a sophisticated piece of kit and involves producing a force curve, the values of which are then stored in a table that receives the current position back from the motorized fader, and supplies to the relevant value which then applies an opposing force to simulate the slingshot. Impressive stuff. Additionally, the hardware is actually controlled by an Arduino-based microcontroller that was developed by the Copenhagen Institute of Interaction Design.

Check out the attached video of this rather impressive piece of kit in action, but be warned, as the next time you start to play Angry Birds on your Mac it just won’t have the same magic now that you now what is possible.