It’s concept time! No, we don’t have a new iPhone 7 concept to show you – at least not today – but rather a PS4.5 or PS4K concept created by some fine folks going by the names of Iskander Utebayev (concept), Ran Avni (Video) and Alex Richman (VFX). What the trio have come up with is an interpretation of what Sony’s upcoming PlayStation 4K may not only look like, but what additional features and functionality it may have beyond the current PS4, and they’re calling it the ‘PlayStation 4 Fx’.

Checking the video out will give you an idea of what the PlayStation 4K could look like, though we would be very surprised if what comes out of Sony looking anything near as nice as this concept. Strange things do happen in technology, though, so never say never. 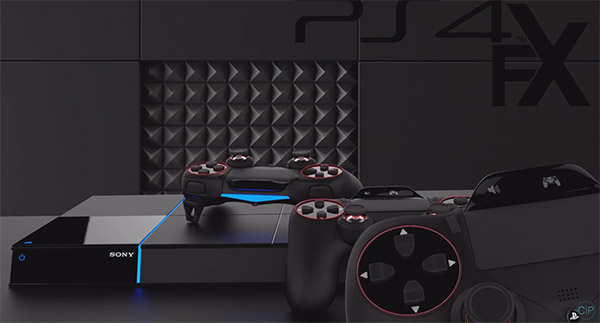 The list of features suggested by this concept aren’t all pie in the sky affairs, though. We already know, or at least strongly believe that a new PlayStation, based on the PS4, will be made available before the PS VR goes on sale later this year. That new device is expected to feature enough grunt to power 4K gaming, which marries nicely with the below blurb, courtesy of our friendly concept thinker-uppers.

Build-in display makes it easier to operate the console, and could assist you with the PS settings without a game interaction.

New option added, that attaches headphones to the controller which transmits a game sound exclusively into a gamers ears.

New PlayStation also includes upgraded system that allows users to enjoy the game on a new level with a 4K definition.

Controllers lights are not only a fancy addition to its design. It also helps users to enjoy the game with an according light theme. (Red and Blue, if a user is getting chased by the police, or alert of a danger that player is about to engage.

Us? Well, we’d just be happy if the PS4.5 looked like the concept art, but if it can include some of the ideas above, then that would be even better. At this point, 4K support is almost a certainty, though, so that may be one we can cross off the list!