New Kinect Mod Lets You See Your Brain Inside Your Head, Redefines The Word ‘Creepy’ [VIDEO]

Microsoft’s Kinect was introduced as a powerful gaming accessory, opening the door for a new generation of motion-controlled Xbox games. The applications escalated quite quickly however, with tech enthusiasts finding many other uses for the motion sensing accessory. This newest one simulates an actual x-ray machine, making it (almost) possible to see inside your skull.

This new mod, developed within Microsoft’s own roofs at its research division in Cambridge, uses the Kinect’s stereoscopic cameras, normally used to detect precise body motions during gameplay, this time to track the location of your skull. From there, it simply projects a brain in order to simulate (very convincingly) an actual x-ray. 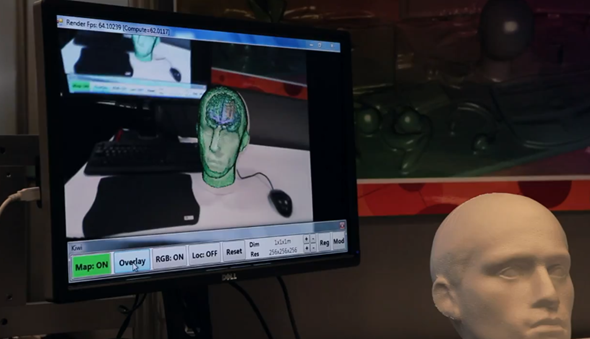 The device, clearly a simple proof of concept, is comprised of a Kinect taped onto the back of a tablet, yet it seems to work incredibly well. Simply pointing the device at a human head, or even a mannequin, will accurately determine the supposed location of its brain. Since it does not represent an actual brain, it can be used for little else, yet it is a proof of concept for what can be done with a simple Xbox accessory: imagine how anatomy lessons would look like if students could get a simulated view of the inside of their bodies. This mod takes advantage of the Fusion API, which has the capability to create 3D models of anything that stands still, including objects and of course, brains.

Despite its original intended application as a gaming accessory, Microsoft was quick to realize other uses for the Kinect and almost immediately launched an official SDK, which allowed developers to write PC software that took direct advantage of the motion technologies that are built into the accessory. Kinect Fusion will be built into the next version of the SDK, which has the potential to open the door for new concepts in augmented reality.

This new fake x-ray will not be available to the public, although the wide availability of the API will surely make it way easier for developers to create many more interesting solutions in the future, some with the potential to become actual products. The API is available free of charge from the Microsoft website, only requiring a working PC, so the next big thing can come straight out of your bedroom.