Coverage of the leakage of new iPhone / iPhone 5 parts is now a common topic here at Redmond Pie. Of course, until Apple officially announces it, we really can’t be sure about the parts, but some of these have been coming from authentic, reputed sources like 9to5Mac and, today MacRumors, so we have a strong feeling that they indeed the real thing.

Today, we’ve come across a video that compares leaked parts of the new iPhone with the iPhone 4S and Galaxy S III. Check it out after the jump. 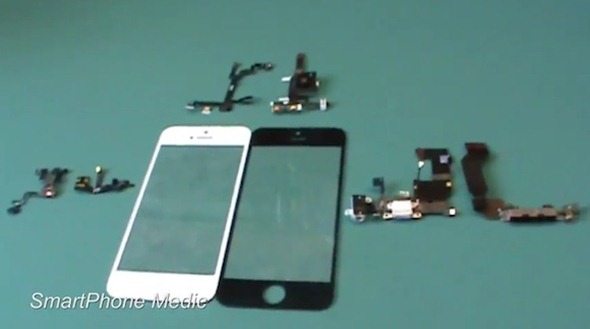 The video comes from the folks over at SmartPhone Medic. They received parts of the new iPhone – flexes, front panels – and placed them side by side with parts from an iPhone 4S and a fully assembled iPhone 4S and Galaxy S III.

The results drawn from the comparison are quite interesting.

The second conclusion to be drawn from the video is: the Galaxy S III is freaking huge! Despite getting a longer display, the new iPhone still only goes up to top end of the S III’s gigantic 4.8” Super AMOLED HD display. Not to mention the width of the thing. I still have no idea how people are comfortable with using such a large phone.

Anyhow, the last part of the video compares two flex cables from iPhone 5 vs. 4S. Both have differently design flexes because of the changed position the earphone port and the dock connector which, in accordance with previous rumors, has 8 pins instead of the 30 on all iOS devices today.

Go ahead and check out the video to get a better idea of the new iPhone’s size versus 4S and Galaxy S III:

What do you think about the new iPhone’s larger display? Will it, as in my opinion, make one handed operation more difficult? Or will it enhance user-experience? Sound off in the comments section over on Facebook or Google+.