New iPad3,6 With A6 Chip Shows Up In Developer’s App Analytics

Sources of MacRumors cite a tip from a developer in suggesting the next-generation iPad could be packing in Apple’s new dual-core A6 processor, or a variation of that chip. The developer is said to have spotted signs of an "iPad3,6" device showing up in his app analytics – a model previously unknown. The device, which, taking into consideration the name, we’ll presume to be an iPad, targets the new ARMv7s architecture used within the A6 SoC Apple has just showcased as powering the iPhone 5.

Of course, it’s pretty early to tell if the next generation of iPad will indeed be running an A6 (or modified version), but given the manner in which the dual-core A5 was bumped up to A5X – offering quad-core graphics to the third-generation iPad, these analytical findings are not beyond the realms of possibility. 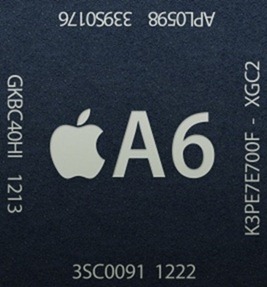 Apple’s A6 processor – unlike its recent software endeavors – has been the recipient of much critical acclaim, and certainly does make the iPhone 5 feel and run in a much more slick and streamlined fashion compared with its predecessors.

Interestingly, the current batch of third-gen iPad models are labeled as "iPad3,1", "iPad3,2", and "iPad3,3," so the naming suggests this particular model has been cut from the same cloth. However, even though we’re expecting a minorly-tweaked third-gen iPad to surface with a couple of modifications next month – notably a Lightning dock connector – it doesn’t seem likely Apple would bump up the processor at this point.

Cutting the life of the third-gen iPad to six-and-a-half months would not be a great public relations move given the current furor with Maps, so we’ll presume "iPad3,6" to be a prototype similar to the current version, but with a bumped up processor to test its capabilities on the big screen.

So, it looks like Apple is not quite at fourth-gen just yet, but in testing what looks to be the processor next year’s iPad could pack, we’ve been given our first insight into where the Cupertino plans to go with its market-leading slate.

Although Apple is expected to release a scaled-down, cheaper iPad "Mini" at some point within the next month, we’re pretty sure this is not it. Logs have already indicated "iPad2,5" and "iPad2,6" – probably indicating 3G and Wi-Fi editions of the upcoming 7.85-inch slab, and there’s little chance Tim Cook’s company would be able to reach the touted price points by packing in the latest in system-on-a-chip tech.