Apple has just rolled out a newly-designed 5W USB wall charger for customers in the United Kingdom that features folding pins, which is not only a space-saver when the plug isn’t in use, but also renders it less of a hazard. We first caught wind of the new UK charger earlier on in the month, and you’ll find details, including price and availability, right after the fold.

The main focus of the big tech companies is to improve upon the features and functions of the devices themselves, but in recent times, increased emphasis has been placed on charging facilities. Apple’s selection of cables and plugs doesn’t come cheap, but they’re mostly well-designed, and where the two-pin system of the United States and much of the world allows Apple to make compact chargers for these nations, the three-pin requires a little more design consideration. 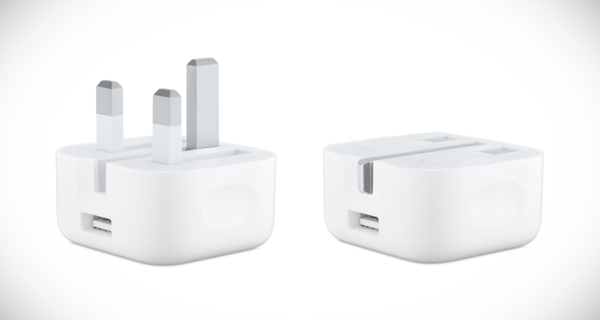 A number of Apple’s rivaling manufacturers have offered folding three-pin charging plugs for a while now, and while the Cupertino is rather late to the party, the new 5W USB power adapter looks perfectly suited to the frequent traveler.

If your charger stays in the same socket month after month, year after year, then you probably don’t need to upgrade, but if you’re always on the move, this looks the perfect travel companion.

The other good news, besides the fact that it can be folded up and squirreled away into just about any pocket or pouch, is that it’s compatible with Apple’s entire iPhone, iPod and Apple Watch ranges. 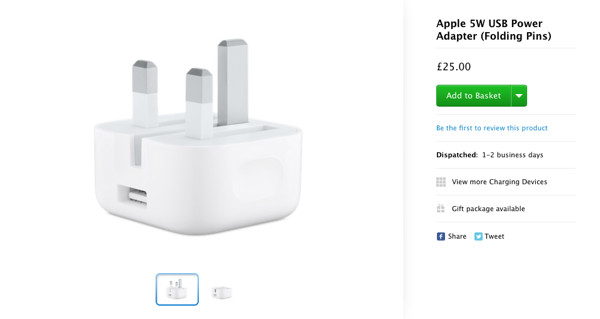 First leaked last week by cyclist and former professional England rugby star Will Carling, who was apparently given the charger by fellow Brit and Apple lead hardware and software designer Jony Ive, the new adapter has finally hit the mainstream, and if you’d like to get your paws on it, then you’ll be able to snap it up from the official online store for the price of £25.

Sure, it’s nothing particularly innovative or exciting, but it’s a welcome improvement nonetheless, and with Apple famed for approaching the finer details with the minimalist’s mentality, this is another release that the company can add to its growing haul of down-sized products.

What do you think about the new charger? Leave your thoughts in the comments section below.