Despite countless reports and Apple having allowed interested parties to check the Apple Watch out firsthand, we knew that some hidden treasures would not be unveiled until after the launch. As well as the numerous stress tests that have begun popping up, we’ve also been treated to a few teardown demonstrations, which offer a close-up glimpse at the device’s innards, and while most of the internal components are arranged as would perhaps be expected, an interesting oxygen-measuring sensor has also reared its head.

Repairs company iFixit tends to be at the center of new Apple product launches, dissecting gadgets to give the hardware-loving community a proper look under the hood. The Apple Watch hasn’t managed to escape the company’s pry, and while the heart-rate sensor is integral to the fitness potential of the device, the iFixit team has also found that its capabilities may extend to measuring blood oxygen levels.

The measuring of heart rate, the process of which was detailed a few days back, is a significant feature given the recent launch of HealthKit, but a blood oxygen sensor takes things to a whole new level. As per iFixit’s discovery, the heart rate sensor reaches beyond the basic optical module for measuring pulse beats – as you might find in most other fitness trackers – but instead, comprises a more advanced pulse-oximeter.

The Watch’s included ability to measure blood oxygen levels is not only important for those looking to take advantage of its fitness facilities, but could also be very useful in the world of general health and wellbeing. 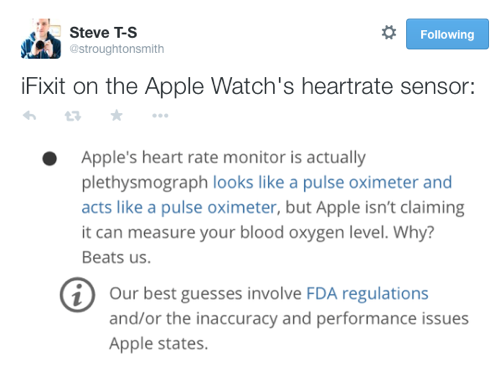 Apple hasn’t made a song and dance about this feature as yet, which suggests that it may not be completely refined. Indeed, iFixit reckons that FDA regulations regarding the legitimacy of any readings could have prevented it from being included alongside the Watch’s flagship features, but where existing devices like the Fitbit have flourished, the Apple Watch could potentially excel in the future with this hidden, currently dormant feature.

For those interested, iFixit’s detailed teardown of the Apple Watch is embedded below, and if you’ve a vested interest in the various workings beyond the interface, then we’d highly recommend taking a peek:

Blood oxygen sensor in a future software update, anyone?