Apple’s iOS 7 release will always be remembered for its radical aesthetic changes, with almost every element having been given a visual makeover en route to dispelling skeuomorphism for good. But the update wasn’t entirely derived through vanity, and amid the clean-up job that Apple undertook with the interface, the Cupertino’s iOS software team also added several key features. Control Center, a portal for various toggles and controls, was among them, and now, a newly-released app adds this feature to the Mac.

OS X and iOS remain very separate entities, but through the past few revisions of each, the distinctive, separative line has become quite blurred. For example, the likes of Game Center, Reminders and iMessage are now very much a part of the Mac experience, and with the OS X 10.10 update set to be uncovered next month, it’s almost certain that the desktop software will benefit from some iOS 7-esque tweaks to the UI. 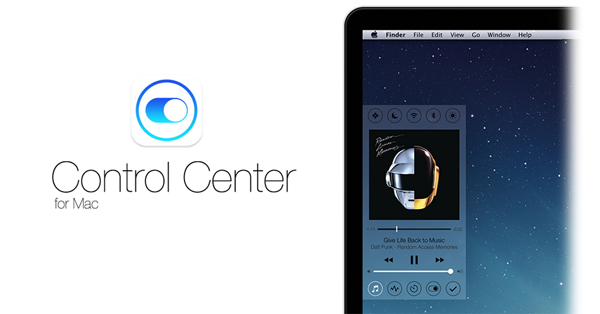 Whether Apple plans to extract any more features from its mobile OS in the coming months is a mystery. In fact, while we’ve heard quite a bit about iOS 8 in the run-up to the Worldwide Developers Conference in early June, but precious little has been divulged with regards to its long-serving cousin.

If Apple did ever decide to add Control Center to the OS X repertoire, though, then you feel that Cindori’s aptly-named Control Center for Mac showcases how it would be implemented almost to the letter.

Sure, the frosted, translucent pane of the Mac edition looks like it has been copied straight from iOS 7, but given that we’re only a couple of months away from OS X getting the same kind of treatment, it makes sense for Cindori to opt for a forward-thinking UI. 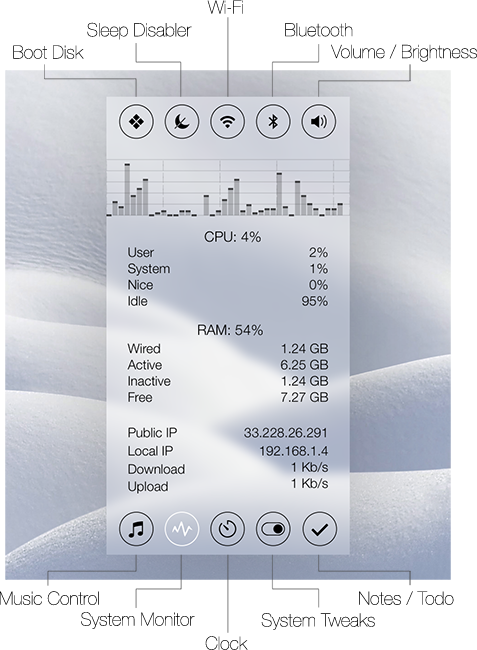 From Control Center for Mac, one can readily toggle several key aspects of a Mac or MacBook, including clock, notes and music control, as well as the more basic elements like Wi-Fi, Bluetooth and volume brightness. You get a bunch of useful information including CPU usage and free reserves of RAM, along with your upload and download rates.

All in all, it’s a pretty useful app, and for $10, will centralize many of your day-to-day toggles and controls in one manageable spot.

For those interested, you can pick up Control Center for Mac by pointing your browser in the direction of: cindori.org/software/controlcenter