Netflix Goes Super HD And 3D, But With A Small Catch

Netflix today announced two new high quality video streams, with one featuring a whole extra for those who just can’t get enough.

Netflix has almost singlehandedly put the video store out of business, and with DVD and Blu-ray disc sales always under pressure from online content distributors, the streaming media company is seeking to re-double its efforts to stay ahead of the competition.

CES has today played host to an announcement by Netflix that promises to kill the biggest argument for Blu-ray over Netflix streaming – 1080p content.

Videophiles have long pointed to the high resolution BRD as the reason that Netflix and the like will always offer a lower quality experience to disc-base solutions. The recently announced Super HD streaming from Netflix may change all that however.

Dubbed Super HD and offering 1080p streaming, Netflix says the high quality stream will only be available via ISPs that have signed up. Right now, in the US, that means Google Fiber and Cablevision. Customers of other ISPs are asked to call their providers and put the pressure on, with Netflix no doubt hoping that pressure from customers will mean ISPs will sign up sooner rather than later. 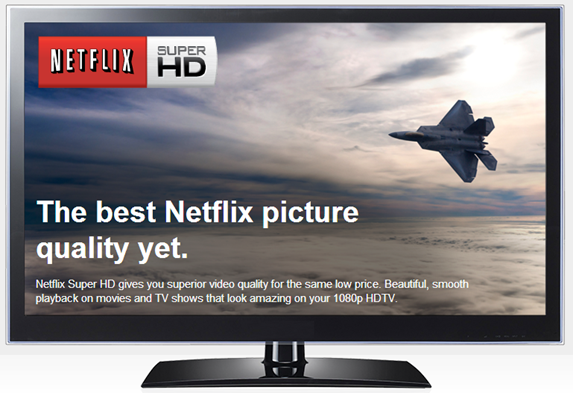 Netflix also says that, internationally, most of its content is already being pushed through supported providers. The Netflix Super HD webpage will offer confirmation for those unsure, too.

If super high resolutions are not your bag, how about 3D? Netflix today also announced that it will be offering streams that come with a whole extra dimension for your viewing pleasure. Users have been noticing some 3D content begin to pop up in Netfiix’s library, and now the whole thing is official. We’re not huge fans of 3D here at Redmond Pie, but this is good news for those that are.

Netflix has been the cause of most of the streaming video watched across the planet for a good while now, and today’s news is a sign that the company will not be resting on its laurels. There are plenty of companies keen on taking Netflix’s streaming crown away from it, with Amazon amongst them and who would dare bet against them?