National Aeronautics and Space Administration, NASA in Jun 09, launched a lunar satellite into orbit, which was to fire a rocket booster at 5,600 MPH velocity into a Moon crater near the Southern Pole of the moon, to cause a six-mile-high explosion with the hope to find water on the Moon. NASA scientists were eager to see LCROSS (Lunar CRater Observation and Sensing Satellite) launching a Centaur rocket into the moon to cause a big blast in the crater. The massive explosion kick up 350 metric tons of debris, letting the trailing satellite cameras analyze the mess for signs of water. Scientists scouring the surface of Earth’s satellite to search for a precious resource called “Water”. The satellite due some reasons could not be scheduled to reach the moon until October 8. 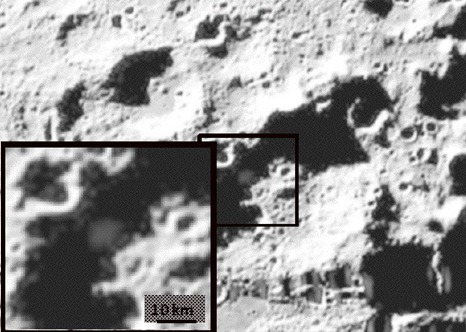 The visible camera image showing the ejecta plume at about 20 seconds after impact.
Image Credit: NASA

On Oct. 9, NASA’s Lunar Crater Observation and Sensing Satellite, nicknamed LCROSS, was in its scheduled position to release a 2.5-ton spent rocket motor, which was to crash into a permanently shadowed crater on the moon’s south pole. The rocket motor had helped put LCROSS and a sister satellite known as the Lunar Reconnaissance Orbiter, or LRO, into orbit in June. The moon surface was finally bombarded on Oct 9. The LCROSS satellite as well as a fleet of telescopes on Earth stations and in space were trained on the crash site to search ejected material for signs of water. Whatever shape water is present on the moon in terms of organic materials from comets, asteroids, and the Sun, could be trapped in these big craters. The explosion kicked off these water containing material along the debris which was then observe red, and analyzed by LCROSS following the path of explosion rockets just lagging four minutes after. 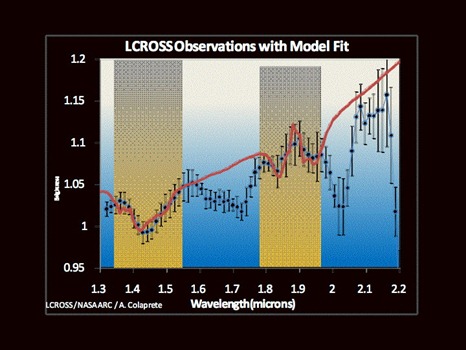 Data from the down-looking near-infrared spectrometer. The red curve shows how the spectra would look for a "grey" or "colorless" warm (230 C) dust cloud. The yellow areas indicate the water absorption bands. Image Credit: NASA 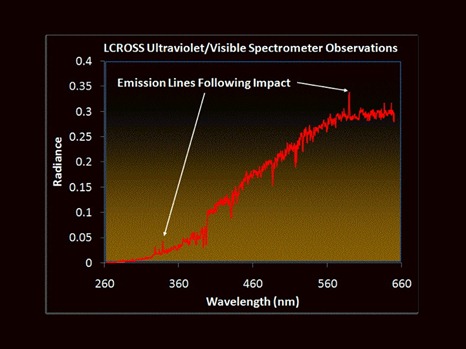 Secret of these explosions results have been just revealed, and delighted scientists at NASA have announced the presence of water on moon. This, no doubt, is a new chapter in our understanding of the moon. The data recorded from Oct 9, 2009 impacts, clearly indicates water presence in one form or the other, in the permanently shadow region of Cabeus, crater near the moon’s south pole.

Michael Wargo, chief lunar scientist at NASA Headquarters in Washington said: "We’re unlocking the mysteries of our nearest neighbor and by extension the solar system. It turns out the moon harbors many secrets, and LCROSS has added a new layer to our understanding."

The argument that the moon is a dry, desolate place stands no longer valid. Yes there is water on moon but the question arises how much? Will it be enough for the Astronauts to live on?