MIUI Lockscreen Experience Available For All Android Devices With MiLocker, Download It Now!

After CyanogenMod, MIUI (me-yoo-eye) is one of the most popular custom ROMs for Android, and for good reason: not only does it have a distinct look, but it also comes with features like being able to customize its distinct looks, an enhanced notifications menu as well as unique Camera, Music and Gallery apps.

In August, we saw two components of MIUI released so that could work on other ROMs – its Launcher and Music app. Today, the folks behind MIUI have released a lockscreen app that lets you, well, change the way your lockscreen looks like based on “MIUI technology”. Details after the jump.

With MIUI’s MiLocker, you can completely customize your phone-unlocking experience. While there is no way to customize each module of the lockscreen from the phone itself, you can choose from the thousands of pre-built themes available from MiLocker’s theme library. At least one of them has to be exactly what you’re looking for.

Based on MIUI technology, also has the world’s leading lockscreen theme library as well as talented designer users.Whether you are a designer or a mobile player, nothing but your imagination limits you.

We’ve tested the app on a Samsung Galaxy S II on Android 2.3.3 and can confirm that it works as advertised. Once installed, you launch it up and choose from pre-installed lockscreens under my lockscreen or you can go over to the online lockscreen tab to download the latest and hottest lockscreens from the themes library. 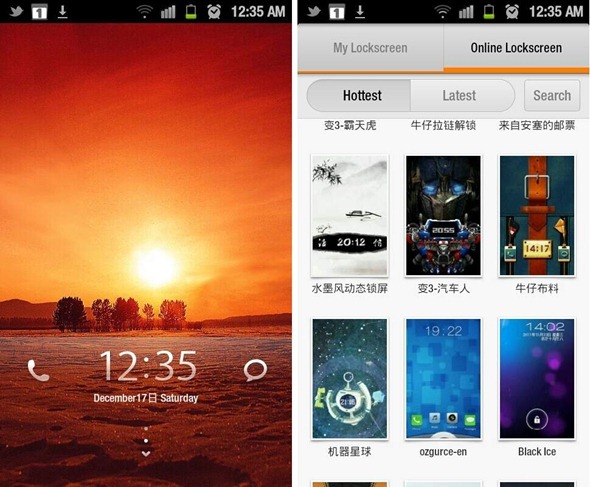 Once you install MiLocker, you may want to check out MIUI-style Launcher and MIUI Music App to give your device MIUI-like experience without installing MIUI itself.

To get the real MIUI experience, though, you will have to flash it on your rooted Android device. We previously did a guide on how to install MIUI (Android 2.3.4) on the Galaxy S II, but the method is pretty much the same for other devices. Just be sure to download a build of MIUI which is made for your device (using GSII file on another phone may damage it).