If the words ‘Misson Control’ are mentioned to you, then you will more than likely either think about the part of OS X Lion which brings together Expose, Dashboard and Spaces to give you a bird’s eye view of everything that is running on your Mac, allowing easy navigation. Either that, or you would think about some far off NASA control center overseeing the latest space mission.

For the benefit of this article, it is probably a lot safer to confine your thoughts to the Mission Control that exists with OS X Lion and and think along those lines. iOS developer coffeejay has released his latest tweak to the Cydia store which he has called ‘MissionControl’ and although it doesn’t provide the exact same functionality as its Mac counterpart, it does follow the same functional pattern. MissionControl for iOS is another tweak which aims to make life easier for the user, bringing common settings and useful shortcuts which can be easily invoked by simply following a user defined Activator method.

There is no denying that a number of other tweaks are available in Cydia which offer the same basic functionality of MissionControl, but this latest tweak offers something a little bit different and expands slightly on the quick launch theory. Launching MissionControl brings in a beautifully presented interface which looks very crisp and smooth, and animates from the top of the screen with a lovely elegant transition. The interface which appears, dominates the full display from top to bottom and presents the user with immediate access to the options with clear and concise information relating to what each option does.

At the time of writing, MissionControl contains a total of ten individual options which range from launching frequently used Settings options, contacting the developer via his Twitter account and launching applications such as Cydia, Facebook and Twitter. One of the clever things about MissionControl is the fallback that it has in place incase one of the options is not available. As an example, one of the options is to allow the user to launch the Twitter application, but if this app is not installed on the device then MissionControl will try to launch the third party Tweetbot app instead, and failing that will open Safari and take the user to the Twitter.com website. This same methodology is present amongst the Facebook application as well, with the fallback being set to open up the Facebook website. 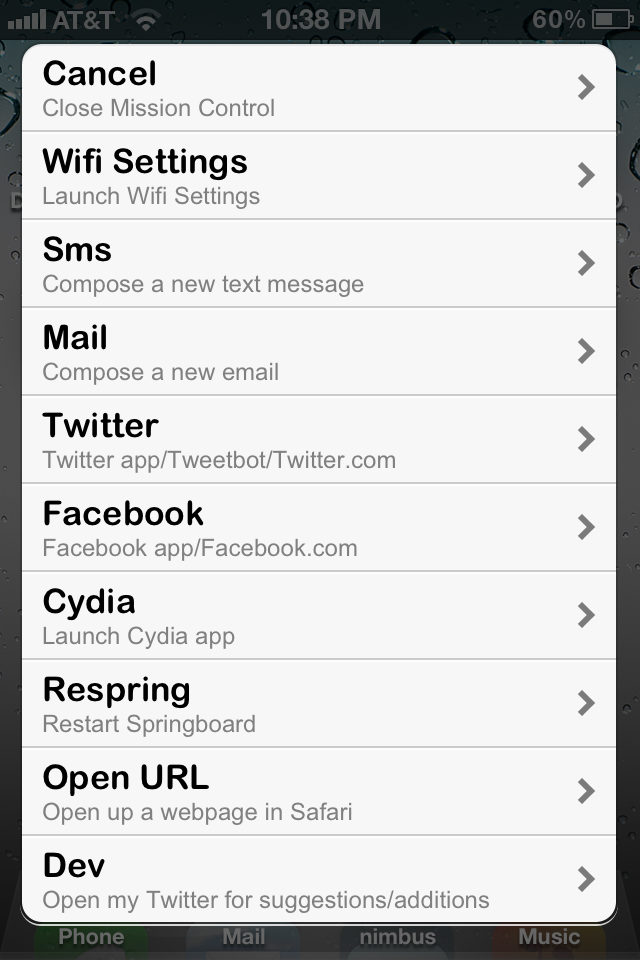 There’s no denying that as a free-of-charge installation, MissionControl holds its own as a very useful and convenient tweak, but I did notice a few niggling issues with it. First of all, it could certainly do with having some additional options, perhaps even allowing the user to set their own options for the interface to allow a more personalized experience. Secondly, and perhaps more concerning, was that when I tap the ‘Facebook’ option to launch my Facebook app (which incidentally is installed on my device), MissionControl for some reason always launches my Lloyds TSB business banking application which is somewhat concerning.